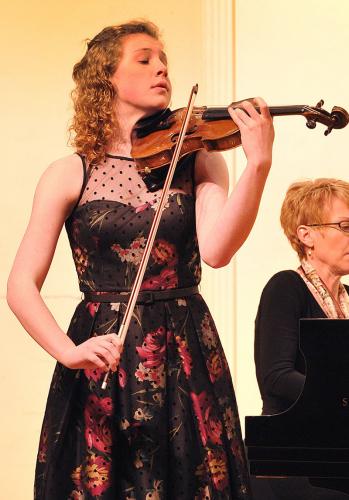 Fiona Shea, 15, of Lubbock, winner of SFA's 2015 Schmidbauer Young Artist Competition, will perform as a soloist with the Orchestra of the Pines when the ensemble performs at 7:30 p.m. Tuesday, March 10, in Cole Concert Hall on the SFA campus.


NACOGDOCHES, Texas - The winner of the 2015 Schmidbauer Young Artist Competition at Stephen F. Austin State University will be the guest violinist when the Orchestra of the Pines performs at 7:30 p.m. Tuesday, March 10, in Cole Concert Hall on the SFA campus.

Fiona Shea, 15, of Lubbock, who took first place in this year's piano and strings competition, will perform as guest soloist when the orchestra performs the first movement of Khachaturian's violin concerto, according to Dr. Gene Moon, director of orchestral studies at SFA.

Describing the program as a "diverse musical smorgasbord of works," Moon said the concert will feature graduate students as guest conductors and the world premiers of works composed by graduate composition students.

"The Cabinet of Dr. Caligari," composed by Ian Deterling of Poplar, Wis., is incidental music that was inspired by a 1920s silent horror film directed by Robert Wiene, according to Moon.

"Deterling's writing uses melodic figures that cunningly weave in and about the orchestra, creating an eclectic tapestry," Moon said in describing the piece.

"Final Flight" composed by Ross Cleveland of Wichita Falls, is a musical recreation of the retiring of an old show plane, the Curtiss JN4-D, known as "The Jenny."

"Cleveland's composition offers subtitles describing each chapter of the grand finale event of the plane's retirement, from the engine's last ignition, to the roar of the engine and its final flight in the air," Moon said.

Guest conductors will include SFA graduate students Jeff Leung of Hong Kong and Eliezer Dobrin of Corinth. Leung will direct the performance of Jean Sibelius' Karelia Suite. Dobrin will conduct Wolfgang Amadeus Mozart's Adagio and Fugue, which Moon described as "a condensed and powerful representation of Mozart's late musical style."