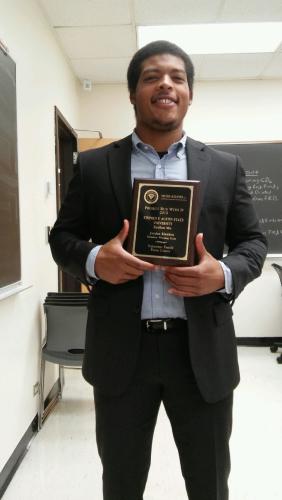 Jordan Maddox, a graduate student studying accounting at Stephen F. Austin State University, participated in the 2015 Project Run With It competition, where he and his team placed first for their work with the not-for-profit organization, Sojourner Family Peace Center. This competition was part of the annual Beta Alpha Psi meeting in Milwaukee, Wisconsin. Maddox was awarded a plaque, and SFA's Beta Alpha Psi chapter received a $1,000 award.


NACOGDOCHES, Texas - Jordan Maddox, a graduate student studying accounting in the Nelson Rusche College of Business at Stephen F. Austin State University, participated in the 2015 Project Run With It competition, where he and his team placed first for their work with the not-for-profit organization, Sojourner Family Peace Center. Maddox's team worked specifically on the Sojourner Family Peace Center's shelter, the Sojourner Truth House.

The competition was part of the annual Beta Alpha Psi meeting, which took place in Milwaukee, Wisconsin, this August. Beta Alpha Psi is an international honor organization for financial information professionals, and Maddox is a member of the SFA chapter, Epsilon Mu. Members must maintain a high GPA and commit to community service and professional hours.

Maddox was awarded a plaque, and the chapter earned a $1,000 award.

"Winning was a big surprise," Maddox said. "It felt good because we put a lot of hard work into the project."

"We were so excited and thrilled when Jordan won," Shoemaker said. "He deserved it because he worked very hard on this."

"The opportunity for our students to network and learn from professionals is priceless," Shoemaker said.

Project Run With It involves 72 Beta Alpha Psi student representatives working in 18 teams of four for about 30 hours to develop solutions to real-life business problems of three not-for-profit organizations.

"This year we helped the Sojourner Truth House, which deals with domestic violence predominantly with women," Maddox said. "We were in charge of creating a model the organization could present to businesses with solid take aways that would invite businesses to donate and become part of the Sojourner family."

Six months before the competition, the project's head coordinator emailed participants a Dropbox link that included articles for individual research. Maddox was tasked with researching the effects of domestic violence. During the competition, Maddox and his teammates created a framework for their solution and built a 5-10 minute presentation. Maddox focused on the intangible and tangible effects of domestic violence.

"It made me feel a lot better about the competition because win or lose we all are helping not-for-profits that are helping people," Maddox said. "Overall, it was a good experience."