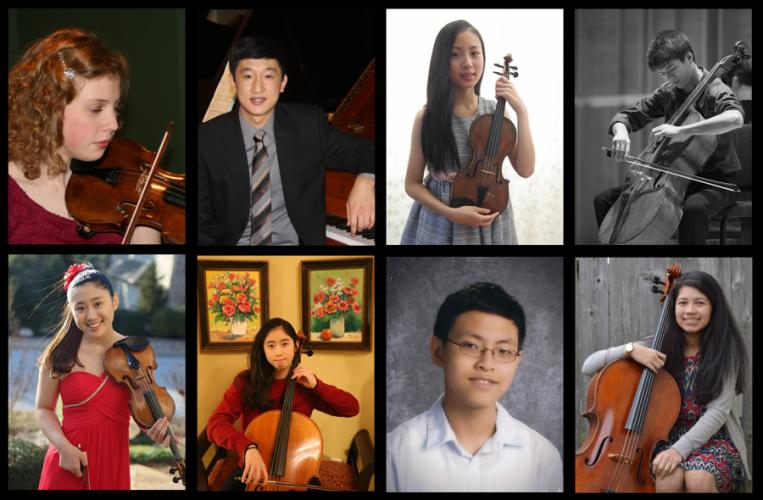 The 2015 Schmidbauer Young Artist Competition will include, among others, the following competitors: From top left to right - Fiona Shea, Brent He, Samantha Choo and Derek Louie; from bottom left to right - Grace Song, Faith Song, Jason Zang and Marcela Reina.

Celebrating its eighth year, the Schmidbauer Competition holds the highest standards in artistry and performance. It is designed to attract young high school musicians ages 15 to 18 who seek to continue future careers involving music and are looking at schools that may be best suited toward helping them reach their goals. It is SFA's goal to be that institution, according to Dr. Gene Moon, director of orchestral studies at SFA and of the competition.

Slated for Saturday, Jan. 31, the competition takes place in Cole Concert Hall in the Tom and Peggy Wright Music Building on the SFA campus. The semi-final round of the competition begins at 3 p.m. Finalists will be announced at approximately 5 p.m. Those who move onto the final round will perform in a live concert starting at 7:30 p.m.

Brent is an 11th grade student at Plano East Senior High School and plays the double bass in the school's chamber orchestra. He has also participated as a double bassist in the Greater Dallas Youth Orchestra since 9th grade and is a co-principle this year. In addition, Brent was the first chair double bassist in the Texas Region XXV All-Region Orchestra in 2011 and 2013 and is one of very few high school students in Texas who has made it to the Texas All-State Orchestra for three consecutive years. However, despite these other musical accomplishments, piano continues to be his true passion and the one that he hopes to further develop into the future.

Derek Louie, 16, is in his sixth year at the Juilliard School pre-college in New York, N.Y., where he studies with Minhye Clara Kim. Derek has given numerous performances including appearances on National Public Radion's "From The Top" and "The Rising Stars Concert Series" at the Great Mountains Music Festival. Derek has won many awards including the Ensemble 212 Young Artist Competition and soloed with the Ensemble 212 Orchestra at Merkin Hall in May of 2014. He was a semi-finalist in the 8th International Tchaikovsky Competition for Young Musicians in Moscow. He won first prize in the Ensemble Du Monde Concerto competition and will be soloing with their orchestra in the 2014-2015 season. He won grand prize in the 2013 International Virtuoso Competition. He also won the New York Chamber Players 3rd Music Competition and soloed with their orchestra in October of 2013. Derek was a finalist in the 2013 Mondavi Young Artist Competition and a semi-finalist in the 7th International Tchaikovsky Music Competition for Young Musicians in Montreux, Switzerland. He soloed with the American Symphonia Orchestra in 2011. He was awarded 1st prize in the 2012 and 2010 YWCA New York Music Competitions and 1st prize in the 8th Annual Long Island Conservatory International Music Competition in 2011. He won first prize in the 2010 AFAF Golden Strings of America Competition. In 2013, Derek attended the Heifetz Institute on a merit scholarship. He has studied with Myuang-Wha Chung, Frans Helmerson, Ralph Kirshbaum and Jian Wang and has performed with Joan Kwuon. He has participated in several festivals including the Great Mountains International Music Festival in South Korea and the MusicAlp festival in France. He has been a member of several chamber groups and has performed for the Dvorak American Heritage Association at the Bohemian National Hall in New York City. Derek has performed at Weill Recital Hall, Carnegie Hall, Alpensia Concert Hall in South Korea, Merkin Hall and several times at Paul Hall, Lincoln Center.

Faith Song is a 15-year-old cellist who is currently attending Westwood High School in Austin. She is studying with Professor Hai Olefsky. Last summer, Faith participated in the Texas Cello Academy at the University of Texas at Arlington and was one of the five soloists to perform during the concert. For her solo, she played the Elgar Cello Concerto in E Minor, Op. 85 Adagio Moderato. In the current school year, Faith is a member of the Westwood High School Symphony Orchestra. She placed second in the 2014-2015 All Region (Region 26) as a freshman and made Texas All State Philharmonic Orchestra, as well.

During her middle school years, Faith was a member of the Canyon Vista Middle School Symphony Orchestra, and, in her eighth-grade year, was the principle cellist. For all three years, Faith had been a part of the All Region 26 Middle School Orchestra and had placed first chair in 2013. Additionally, she was, and still is, a member of the Chamber Music in Public Schools (CHAMPS); her piano quintet from Canyon Vista won the 2013-2014 Coltman International Competition.

Apart from school, Faith was a member of the National Junior Honor Society in Canyon Vista Middle School and was ranked sixth in the National French Competition. Outside of school, Faith is involved in the Austin Youth Symphony Orchestra; she had auditioned during eighth grade (the youngest grade permitted) and was successfully accepted as a member.

Fiona Shea is a 15-year-old violinist from Lubbock. She is currently the concertmaster of the Youth Orchestras of Lubbock Symphony and also a member of the YOL Chamber Music Program. At the age of 10, she was a concerto soloist with the Jacksonville (Illinois) Symphony Orchestra as the grand prize winner of the "Talent Among Us" competition. Since then, she has won competitions and been featured as concerto soloist with the Youth Orchestras of Lubbock Symphony and the Intermediate Age Division Orchestra at the Interlochen Center for the Arts 2013 Summer Program. She received honorable mentions in the 2012 Walgreen's/Midwest Young Artists Competition and the 2014 Juanita Miller Concerto Competition in Dallas. Most recently, Fiona was selected as the 2014 Junior Division Winner of the Texas American String Teacher's Association Solo Competition. She was a member of the 2014 Texas All-State Philharmonic Orchestra, is a member of the 2015 Texas All State Symphony Orchestra and was honored as an Outstanding Soloist in the 2014 Texas UIL State Solo Contest. She has participated in summer chamber music and orchestral programs in Minnesota, Colorado and Michigan and most recently in Charles Castleman's Quartet Program in upstate New York. Fiona studies with Dr. John Gilbert, professor of music at Texas Tech University.

Grace Song is a 17-year-old violinist and a senior at Westwood High School in Austin and studies with Brian Lewis, professor of violin at the University of Texas in Austin. Her current achievements include winning the Fort Worth Symphony Orchestra Competition which gave her the opportunity to play with the Fort Worth Symphony Orchestra, the Wilcox Competition along with the Sally Rudd Supplemental Award, an invitation to demonstrate at a lecture hosted by Dr. Charles Ervin at the 2014 Menuhin International Violin Competition, Austin, and the grand prize at the 5th and 7th Young Musicians' Festival Competitions.

In the summer, Grace attends the Meadowmount School of Music in New York. Aside from violin, she is an accomplished pianist. She has won numerous piano competitions, including the ADMTA Piano Solo Competition.

Jason Zang, a 15-year-old pianist from Dallas, is a sophomore at Newman Smith High School in Carrollton where he is an advanced student, studying college math and physics for seniors. Jason began studying classical music and piano at the age of 5 with a local private piano teacher.

In two consecutive years in 2012 and 2013, Jason won first prize in the Texas Music Teachers Association's 7th and 8th Grade Performance Competition for Piano Solo. He also won second place in 2012 TMTA-MTNA Performance Competition. He is now studying with the renowned professor Dr. Tamas Ungar who has elevated Jason's understanding of the piano and knowledge of the repertoire. Ungar's mentoring has had a profound effect on Jason's music and personality. "I am totally dedicated to studying and performing the great masters, and I approach this with a positive attitude that will lead me to give my very best at all times," Jason said.

Marcela Reina is a 17-year-old cellist from Houston. She is a senior at J. Frank Dobie High School and is an active member in the varsity orchestra and also plays bass for the school's other orchestras when needed. She began playing the cello when she was 9 and started taking private lessons two years ago. She is now studying with Mark Varian. In her spare time she participates in the Pasadena Philharmonic Orchestra and other events. After high school, Marcela is planning to double major in both cello performance and music education and will use those two degrees to perform and teach while participating in other competitions.

Samantha Choo, 15, of Plano began studying violin at the age of 7. She is currently a student of Philip Lewis, concertmaster of the Richardson Symphony Orchestra. Choo recently had the honor of performing at the 2014 Basically Beethoven Festival's Rising Star Recital. She also had the privilege of playing at Chamber Music International's October pre-concert. Samantha has soloed with the Meadows Symphony Orchestra and Greater Dallas Youth Orchestra as their concerto competition winner.

Admission to the semi-final round of the competition is free, and tickets to the final round are $8 for adults, $6 for seniors and $3 for students/youth. For ticketing information, call the SFA Fine Arts Box Office at (936) 468-6407.

For more information about competition, contact Moon at (936) 468-3885 or moongh@sfasu.edu or visit www.schmidbauercompetition.org.