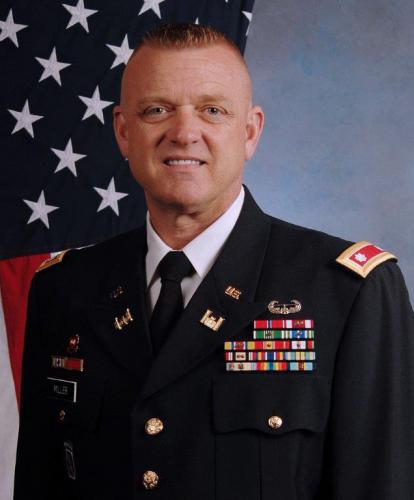 Miller, a resident of Nacogdoches, earned a Bachelor of Business Administration and Master of Science in safety engineering with an environmental emphasis from Murray State University.

The lieutenant colonel's previous assignment was at U.S. Army Pacific Command, where he served as the facility and construction branch chief, deputy chief of staff for engineering.

In addition, Miller served three years as an assistant professor of military science at New Mexico Military Institute followed by an assignment as the G3 mobilization officer for the 416th Engineer Command in Darien, Illinois. During this assignment, Miller completed the U.S. Army Command and General Staff College.

Miller said he has never missed a commencement ceremony in his three years at SFA or an opportunity to carry on the tradition of recognizing ROTC officers established by his predecessor.

"I have been at every graduation to shake the hands of my officers as they exit the stage after receiving their diplomas," he said. "I am proud of them."

As the commencement speaker, Miller said he hopes to inspire the graduates by speaking from his heart. "I plan to encourage the graduates to further their education and lead by example. They should learn to never take 'no' as an answer and to also stay true to their moral compass. And, if given the opportunity, they should give back to their families, the community or this university that has given so much to them."

Miller was recently selected for the Broadening Opportunities Program to attend the British Advanced Command and Staff College in Shrivenham, England. He will leave his post at SFA this summer. Miller has been married to his wife, Sara, for 15 years, and the couple has three children.

More than 1,400 SFA degrees are expected to be awarded this spring, making it the university's largest graduating class to date. Miller will provide the commencement address at the morning ceremony and the afternoon ceremony.