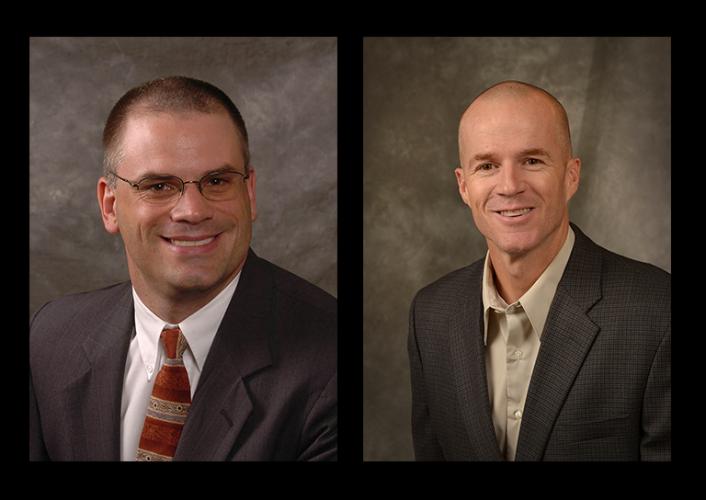 The faculty awards presented during the Gala recognize innovation and excellence in teaching and research. Dr. Eric Jones, associate professor of exercise physiology and human performance in the James I. Perkins College of Education, is the recipient of the 2015 Faculty Achievement for Teaching. Dr. Christopher Comer, professor of forest wildlife management in the Arthur Temple College of Forestry and Agriculture, will receive the 2015 Faculty Achievement Award for Research.

Jones has been a member of the SFA faculty since 2007. He serves as the director of the human performance lab, where he has helped secure approximately $450,000 in funding, allowing students to become involved in numerous experiential learning and research opportunities. Currently, there are about 700 undergraduate students in the fitness and human performance studies program and 60 master's students in the program.

Jones teaches courses in exercise physiology, fitness appraisal and prescription, and field and clinical testing, while working alongside many students on extra-curricular academic projects and serving as a mentor of student-authored, peer-reviewed publications and manuscripts.

Jones is the author or co-author of 15 publications and 37 presentations. He has served as a committee member for 19 theses and has supervised eight graduate student's theses.

"Dr. Jones has been a special gift to SFA students during these past eight years," said Dr. Judy Abbott, dean of SFA's James I. Perkins College of Education. "His type of teaching, mentoring and engagement fans the sparks of interest and expertise in students. And it is this type of teaching, mentoring and engagement that has prepared students to compete for prestigious employment at institutions such as the Cooper Clinic in Dallas."

Jones serves as the Department of Kinesiology and Health Science graduate assistant coordinator and the graduate program coordinator. In addition, he has served as chair of the James I. Perkins College of Education's Undergraduate Research Conference since 2008 and on the strategic planning committee for Envision SFA. He is a member of the Strategic Planning Committee and on the Graduate Council Committee.

"I learned early that my level of transparency with students would dictate the impact and influence I could have on them," Jones said. "Therefore, I enjoy interacting with students outside of class, which allows the students to get to know me and my family. This has created a level of trust and respect that has truly enhanced the learning environment and my teaching experience as a whole."

Jones received his bachelor's degree in fitness and sports medicine from Southeast Missouri State University and his master's and doctoral degrees in physiology from the University of Alabama.

Dr. Mel E. Finkenberg, SFA professor emeritus of kinesiology and health science, called Dr. Jones perhaps the best hire of his career. "He is a passionate teacher, and despite teaching courses that are traditionally amongst the most difficult and often the most feared, his student evaluations are consistently outstanding," Finkenberg said.

Comer has been at SFA since 2005 and teaches multiple courses in wildlife and forest resource management as well as field ecology, field techniques and management of diseases in wild animals. His research emphases include rare bats, black bears, wild turkeys, songbirds, predator ecology and white-tailed deer.

Comer's awards include the 2011 Teaching Excellence Award for the Arthur Temple College of Forestry and Agriculture at SFA, 2012 Educator of the Year for the Texas Chapter of The Wildlife Society and the Distinguished Grant Award for a senior faculty member at SFA in 2014.

Since his arrival at SFA, Comer has procured more than $3.6 million in external funds for research from a diverse set of public and private partners, including Texas Parks & Wildlife Department, United States Fish and Wildlife Service, U.S. Department of Defense and the USDA Forest Service.

His record of publications supports his varied research interests. Comer has been an author or co-author on 17 published papers and has been involved with dozens of professional presentations at state, regional and national venues. He also has supervised 12 graduate student's theses with 11 more in process. Comer or his students have presented research results in more than 40 oral and poster presentations at scientific meetings during the past five years.

"The most challenging part of the research process is taking our findings and presenting them in peer-reviewed literature. The peer-review process can be a real grind, but seeing your work published and then cited by other researchers is very rewarding," Comer said.

Comer received his bachelor's degree in biology and economics from Carleton College. He earned his master's degree in environmental pollution control from Pennsylvania State University and his doctoral degree in forest resources from the University of Georgia.

"Dr. Comer communicates his research to undergraduate and graduate students through mentoring and coursework," said Dr. Hans Williams, interim dean of the Arthur Temple College of Forestry and Agriculture. "He is dedicated to the field of wildlife management and has developed a strong reputation in the region and nation for his work on a variety of topics."

Williams said several of Comer's research projects have been highlighted by the news media, including Texas Wildlife magazine, the Dallas Morning News and the Associated Press. "In particular, his black bear research was the subject of a Texas Parks & Wildlife television program in 2012 titled 'Black Bears Returning to East Texas,'" Williams said.

The Gala cocktail reception begins at 6 p.m. and will be followed by a candlelight dinner at 7 p.m. Entertainment will be provided by Blind Date, featuring seven of Austin's most accomplished musicians whose repertoire consist of everything from dance music to jazz, rock, country and hip hop.