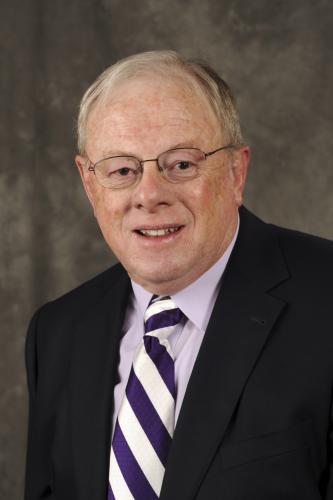 Dr. Leon Young, SFA professor of agriculture and director of the soil, plant and water analysis laboratory in the Arthur Temple College of Forestry and Agriculture, will present "Can We Feed Nine Billion in 2040 and How?"

A native of Devine, Texas, Young received a Bachelor of Science in plant science from Texas A & I University in 1970. Following graduation, he moved to Ames, Iowa, to begin graduate work in soil fertility at Iowa State University. Young earned his master's and doctoral degrees from ISU in 1972 and 1976, respectively. His research focused on a comparison of corn and soybean responses to phosphorus and potassium fertilization.

Young moved to Nacogdoches in 1975 to teach soil science and agronomy courses, as well as to manage the SFA Soil Testing Laboratory. For more than 40 years, he has instructed more than 2,500 agriculture students in his Agronomy 331 soil science course.

As director of the laboratory, he has analyzed in excess of 200,000 soil samples, in addition to making lime and fertilizer recommendations for each sample. His facility also analyzes forage, water, animal manures and other materials that are of interest to the agricultural field. Currently, the laboratory provides analytical services to students, faculty members and researchers throughout the SFA campus and at other institutions.

Young served as chair of the SFA Department of Agriculture from 1984 to 1997. Under his leadership, the college enhanced its curriculum with the construction of several new educational facilities at the Water C. Todd Agricultural Research Center, formerly the SFA Beef Farm, including a swine barn, new working corrals for cattle, and the poultry research center and feed mill. Young also assisted Dr. David Creech, 2006-07 SFA Regents Professor of horticulture, in developing SFA Gardens in 1997.

Some of Young's greatest accomplishments have been assisting with thesis research and writing for 34 master's degree students, which have helped improve the soil and forage testing service, improve lime and fertilizer recommendations, and understand the problems of broiler litter management. Also, he takes great pride in assisting subsistence farmers in Tanzania, Mozambique, Angola and Jamaica.

Young is a 45-year member of the American Society of Agronomy and the Soil Science Society of America, as well as a member of the Crop Science Society of America and the National Forage and Grassland Council. He was named an SFA Regents Professor in 2008, the Nacogdoches County Agriculture Educator of the Year in 2012 and received the SFA Alumni Association Distinguished Professor award in 2013. Currently, he serves on the East Texas Regional Water Planning Group preparing water plans for the next 50 years, and he also is a contract broiler grower for Tyson Foods.