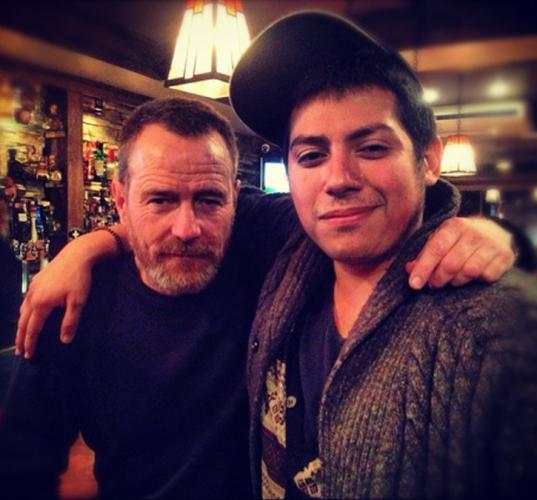 A short film by SFA graduate Brandon Polanco (right) will be shown at the 68th Cannes Film Festival. He is shown here with his "Writer's Block" star Bryan Cranston.


NACOGDOCHES, Texas - A short film written and directed by a Stephen F. Austin State University graduate has been accepted into the world-renowned Cannes International Film Festival as part of the Short Film Corner.

Brandon Polanco's film "Vicky & Jonny" was produced last August and is the story of a young woman coming to terms with her memories and taking responsibility for her choices.

"Vicky Jones confronts her inner demons through a series of memories. We meet Vicky, in her apartment smoking cigarettes, and analyzing a memory of when her father abandoned her in a diner. She ultimately finds the power of forgiveness which helps take control of her life," according to the film's synopsis on the Festival De Cannes' website.

"I am proud of this moment," Polanco said in an email interview. "I will be attending the festival throughout the entire week. I am excited for the experience and chance to meet so many talented artists and producers.

"To me it means a chance to share my work with a broader audience," he said. "However, deep down I hope to manifest strong relationships with industry leaders who can help bring my work to a bigger platform."

Polanco earned a Bachelor of Fine Arts in theatre at SFA in 2009. He was among the Rose Bruford Exchange students in the School of Theatre, and while on the exchange he also studied at RESAD (Spain's Royal Dramatic Academy) in Madrid. His short film "Writer's Block" starring Bryan Cranston of AMC's "Breaking Bad" fame won widespread acclaim in 2013-14 and was shown at the 2014 Nacogdoches Film Festival.

His second short film was "Passing By" in 2014, followed by "Vicky & Jonny." He has directed other projects ranging from music videos to commercials. He also wrote, directed, acted in and executive produced the series "Pride" shown online at www.pridetheseries.com.

Polanco is currently working on three feature films in various stages of development as well as other projects.

"My feature film 'Dylan Rey' is set in Austin and takes place in East Texas and South Texas," he said. "It is a story about magic and the death of 'god.' I am passionately working on the film and will be venturing to Texas this summer to work on the project."

He will soon kick off an Indiegogo campaign for his feature film "Ursula," and he has a newly written feature called "Vicky Jones," which is the sequel to the Cannes short film "Vicky & Jonny." He is also prepping season two of "Pride" and is finishing up post-production on his fifth short film, "Alchemy."

"I have been a busy bee, but I can't complain," Polanco said. "I am truly passionate about my work and focusing on manifesting these big projects."

Originally from Austin, Polanco lives and works in New York City. He is co-owner of 3 of A Kind Productions.

The 68th annual Cannes Film Festival is schedule for May 13 through 24 in Cannes, France. The festival previews new films of all genres from around the world.