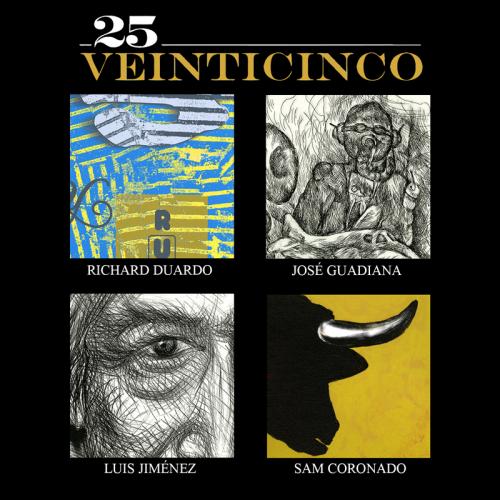 
NACOGDOCHES, Texas - "25 Veinticinco: Mexican-American Prints from UT San Antonio," will open with a reception from 6 to 8 p.m. Saturday, Oct. 24, in The Cole Art Center @ The Old Opera House in downtown Nacogdoches.

"25 Veinticinco" is a suite of 25 prints by 25 Latino and Latina artists, and each print is signed, numbered and issued in a limited edition of 30, according to John Handley, director of art galleries for Stephen F. Austin State University.

The images are printed on 22-inch by 30-inch archival paper and were produced using various techniques, including stone and aluminum plate lithography, etching and aquatint, linocut and screen-printing, Handley said. The artists worked in collaboration with master printers Neal Cox, associate professor of art in SFA's School of Art, and Steven Carter, who works in the print studio of The University of Texas at San Antonio's Department of Art and Art History.

"The common thread binding all of the work together is the cultural heritage shared by the artists," Handley said.

The most well known artist showing in the exhibition, Handley said, is the late Luis Jimenez, who died tragically halfway through the completion of his included work - a lithograph portrait of Cesar Chavez.

Before coming to SFA to accept an appointment as a professor in the School of Art, Cox acted as the master printer for the UTSA Collaborative Editions program. His primary task involved the technical execution of the prints to be exhibited in collaboration with each artist. Cox accepted his appointment at SFA before completion of the print suite and had in mind to exhibit the prints at SFA when the project was finished, according to Handley.

"25 Veinticinco" will show in Ledbetter Gallery. Opening the same night are two other exhibitions, including "The Devil You Say! The Saintly, and Not so Saintly, in Folk Art" in Reavley Gallery and "The Tenderness of Egocentrism: Drawings by Manuel Miranda" in the Reception Gallery. "25 Veinticinco" and the Miranda exhibitions run through Jan. 2, while "The Devil You Say!" exhibits through Jan. 16.