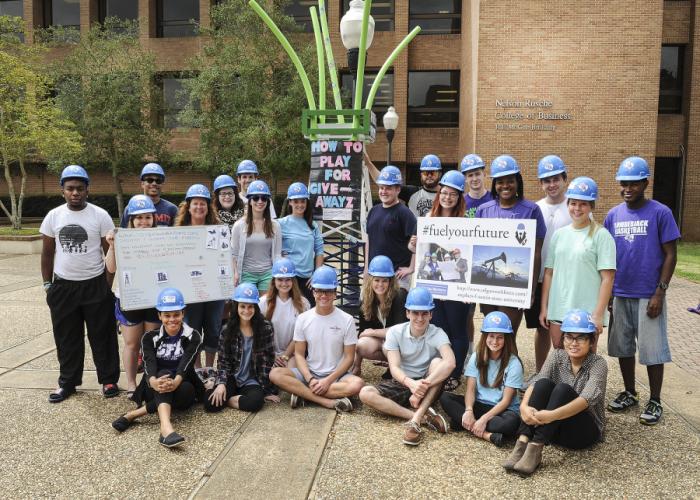 Stephen F. Austin State University students in Dr. Marlene Kahla's advertising and promotions class are developing an advertising campaign to promote careers in the oil and gas industry for the American Petroleum Institute. They hope to advance to the final round of the competition in San Francisco, where they will be eligible to receive funds for scholarships.


NACOGDOCHES, Texas - Stephen F. Austin State University students enrolled in Dr. Marlene Kahla's advertising and promotions class have a unique opportunity that could win them funds for scholarships and five representatives from the class an all-expense-paid trip to San Francisco.

At the beginning of the spring semester, EdVenture Partners, project directors for the American Petroleum Institute, reached out to colleges and universities and asked students to submit creative briefs for an opportunity to help API increase the millennial generation's awareness about career opportunities in the oil and gas industry.

"On day two of the semester, we hit the ground running," said Dr. Marlene Kahla, SFA associate professor of marketing. "We immediately started conducting research on the best way to reach millennials and capture their attention. Then, we began developing a way to accomplish it."

The group, comprising millennials themselves, knew that visual awareness would help gain attention, so they devised a campaign utilizing a small oil derrick supplied by one student's father.

The oil derrick, decorated with fake money, helps symbolize the higher-than-average salaries often associated with jobs in the oil and gas industry. The group moved the derrick around campus, stationing it in high-traffic areas. Students in the class set up tables near the derrick and offered giveaways to fellow students who stopped by and inquired about the display.

"The class used 'Did You Know' fact cards that participants pulled from blue hard hats donated by Fastenal. The fact cards called attention to often little-known details about careers in the oil and gas industry," Kahla said.

During their interactions, representatives from the class also requested participants log on to a special website created by EdVenture to count unique hits, which also is an element of the competition.

"At the competition's end, the number of unique hits increases the classes' chance of winning and advancing to the final round of the competition in San Francisco," Kahla said. "The hits help validate that the class is out there and communicating its message."

Guest speaker Jeff White, director of operations for SPX Power + Energy in Houston and father of class member Taylor White, will be on campus from 12:20 to 12:50 p.m., Monday, April 13, in the McGee Building, Room 133, to help highlight the campaign and share information about careers in the oil and gas industry.

The event, titled "Snack N' Fact," will include free food and giveaways. The public is invited to attend free of charge.

The first leg of the competition runs through Wednesday, April 15. Anyone wishing to help the class with collecting hits on the API website can access http://www.oilgasworkforce.com/stephen-f-austin-state-university