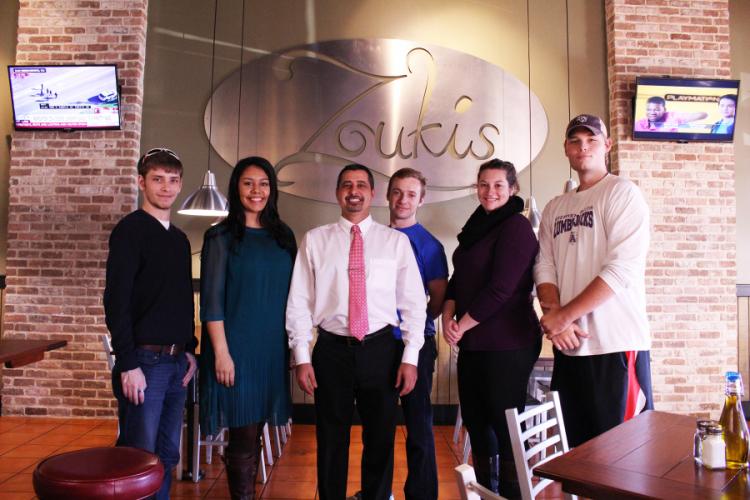 "Through high-impact experiential learning, both students and local businesses gain value," said Greg Patterson, SFA lecturer of journalism. "The students' goal this semester was to produce targeted messages, graphics and photography for their specific business and then publish those to a variety of social media channels."

"As part of a generation driven by technology, I have never thought twice before publishing content on social media," said Belen Casillas, an SFA senior journalism major. "After taking this course, I have a much deeper understanding of strategic social media and its power to share information, influence and teach a specific audience."

Patterson said most university students understand and use social media only on a personal level.

"This course took their practiced personal social media skills and combined them with their media skills," Patterson said. "Our students, who are mass media majors, have different discipline emphases: public relations, journalism, broadcasting and advertising. In each area within our department, students have gained the ability to write, create graphics, capture photography, and produce and edit video. Communicating a message is the crux."

"Personas are a way to personalize messages that help answer questions, anticipate objections and better relate to the businesses' ideal clients," Patterson said.

Students also created a social media plan as well as a style guide.

"Public relations ceased being lectures, textbooks and written tests and became brainstorming sessions, content production and analyzing to make improvements," said Rachel Owens, an SFA public relations senior. "We spent the bulk of our time learning strategies and tactics in the classroom, so it was really fun to be able to put everything we learned into practice with an actual business in a real-world setting."

Giving students real-world experience while practicing media skills was one of Patterson's goals for the course.

"We have some great students, and I really wanted those students to stretch their comfort level by working in a group setting with businesses external to SFA," Patterson said. "I felt that might inspire them to step it up even more."

Alexis Morgan, a senior broadcast major, said the work taught her how to fully communicate for a company she represents.

"I really appreciated how this class pushed me to think outside the realm of just a simple posted text message and to stretch my boundaries of creating content," Morgan said.

Christopher Sanchez, an SFA senior broadcast major, said the opportunity to work with a client and contribute to the team motivated him more than his grade in the class.

While beneficial to the students, work produced as part of the class also helped local Nacogdoches businesses, Patterson said.

"The social media team helped Zoukis maximize its potential," said Avo Dermakardijian, owner of Zoukis. "The customers' responses were amazing. I'm so grateful to have met Belen and her crew. I couldn't have done it without them. I would definitely recommend them to any future employer."

Hunter Sowards, manager of Social House Apartments, said he noticed more interaction in the office in response to the social media posts.

"I didn't realize how much social media could impact our business until the students came and asked us if they could take over our social media for a few weeks," Sowards said.

The students' work could potentially create new relationships between SFA and other businesses in the future. Karen Harris, owner of House of Traditions, said people noticed her business' social media presence.

"I've already told other downtown businesses about this class, as many have asked how I've had time to do so many posts," Harris said. "I let them know it's only through SFA and this class. The students have opened my eyes to ways I can reach a broader audience."

James Hardcastle, an SFA senior broadcasting major, said the project was a valuable educational experience that could not be replicated with books and lectures alone.

"This course has allowed me to actually practice what I have learned," Hardcastle said. "Not only did we plan this from the beginning of the year, but we actually executed what we sought out to do. In a lot of courses you sit and listen, but in this course there was no choice but just to jump in and see what worked. If something didn't work, you went back and revised, which, in my opinion, is the best way to learn-by actually doing it, regardless of mistakes along the way."

Patterson said the course was beneficial to more than just the students and the five local businesses.

"It's exciting to see concepts and skills come alive as well as see students give back to our community in such a way where they became ambassadors of our program and SFA," Patterson said.