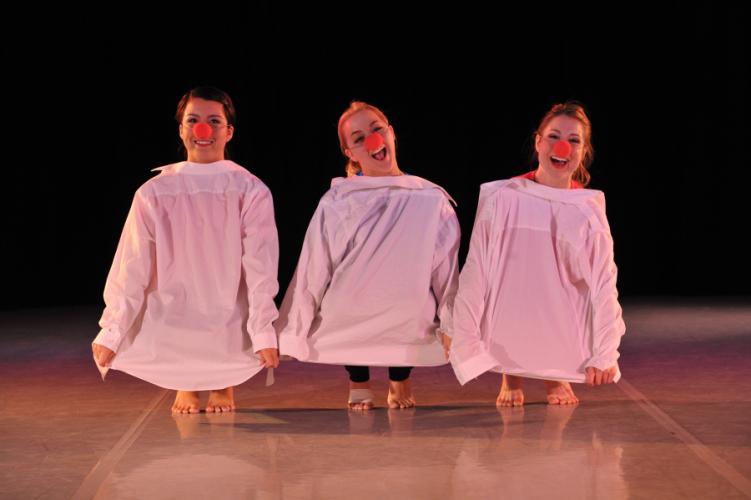 
A performance by the Stephen F. Austin State University Repertory Dance Company at 7:30 p.m. Feb. 13 and at 3 p.m. February 14 will feature works by SFA faculty members and works by guest artists from Texas and Mississippi.

The works presented during the concert are part of this year's repertory for the company. Guest artist choreography features "The Other One," a work that debuted at SFA in spring 2014 by Min Kim of University of Texas Pan American. Senior dance major Elena Conde dances the solo role of "the other" in the work, which has a clear thematic message of isolation and acceptance.

"Creed of Fools" is a three-part suite choreographed by Meredith Robertson-Early of the University of Southern Mississippi. "It is abstract yet emotional," said Libby Rhodes, professor of dance in SFA's Department of Kinesiology and Health Science. "It contains gestural and postural motifs inspired by Ms. Early's upbringing in the Catholic Church in New Orleans. The powerful work is danced so strongly by the company that it has been selected by the dance faculty to represent SFA at the upcoming conference of the Central region of the American College Dance Association hosted by Southeast Missouri State University."

SFA faculty choreography will be presented by Professor Stan Bobo, whose work "Secret Elan" is an atmospheric yet playful piece to music by Patrick Roulette and Eugene Ars. Rhodes, whose research interests include Latin American dance, will present an upbeat Latin jazz piece to music from the album "Cubanismo!" by Jesus Alemañy. In addition, Rhodes restaged a series of duets from the repertory of the National Folkloric Ballet of Panama, titling the presentation "Duos Panameños."

Adjunct faculty member Heather Samuelson has recreated "Qui Manque de Vie," a somber piece that is approached by the six female dancers with seriousness and drive. Newly arrived faculty member Michelle Strong will bring a duet titled "Seeking Together" with music by Yiruma.

Dancers from the Texas A&M University dance program also will participate in the concert, which will be held in Cole Concert Hall.

Tickets are sold in the Cole Concert Hall box office, and prices are $12 for general admission, $5 for students, and $8 for SFA faculty, staff and senior citizens. The box office opens one hour before each show and will accept cash and checks. For more information, email dance@sfasu.edu or call (936) 468-1543.