SFA School of Theatre gearing up for SummerStage Festival 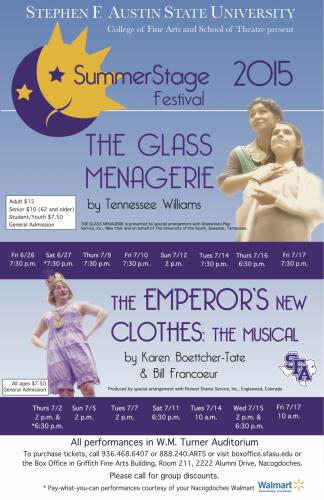 This year's SummerStage Festival is slated for June 26 through July 17 and features Tennessee Williams' masterpiece "The Glass Menagerie" along with children's favorite "The Emperor's New Clothes: The Musical" by Karen Boettcher-Tate and Bill Francoeur.


NACOGDOCHES, Texas - The academic year at Stephen F. Austin State University may have ended, but the activity in SFA's School of Theatre is gearing up for the 2015 SummerStage Festival, which will feature two classics that are sure to please audiences of all ages.

This year's SummerStage Festival is slated for June 26 through July 17 and features Tennessee Williams' masterpiece "The Glass Menagerie" along with children's favorite "The Emperor's New Clothes: The Musical" by Karen Boettcher-Tate and Bill Francoeur.

The SummerStage Festival was launched last year as the School of Theatre began to reach out to new audiences looking for a casual and entertaining way of spending warm-weather time with family and friends, according to Scott Shattuck, the school's director.

"With live music and refreshments before the shows, the wonderfully social part of seeing a favorite story onstage is more fun than ever at SFA," Shattuck said. "We had our largest summer audience yet in 2014, and we think that this year's plays will appeal to even more people from throughout our community."

Angela Bacarisse, who directed the popular and successful production of Monty Python's "Spamalot" last fall, returns as director of "The Emperor's New Clothes: The Musical," one of the world's most beloved children's stories freshly enhanced with original songs in various pop styles. Hans Christian Anderson's short tale is about two mischievous swindlers who persuade a vain emperor that they can outfit him in a suit so glamorous that it's invisible to fools. When he falls for their scheme, the results are hilarious.

Laura Rikard, assistant professor of theatre at SFA, will direct "The Glass Menagerie," the story that launched Williams' career as America's greatest playwright. The play revolves around Williams' unforgettable characters - Amanda Wingfield, the faded southern belle, her daughter Laura, as fragile as the shimmering animals of the title, Laura's compassionate but frustrated brother Tom, and the "gentleman caller" that rocks their delicately balanced world.

Weekday matinee performances of the children's production are popular not only with daycare and school groups but also with retired grandparents looking for great things to do with kids when it's often too hot to play outside, Shattuck explained. The 6:30 p.m. curtain time for evening children's shows gets children home for a reasonable bedtime, while the 7:30 p.m. curtain time for "The Glass Menagerie" provides time for a bite of dinner after work without getting grownups home too late, either.

"This year we're experimenting with 2 p.m. Sunday matinees of both shows to provide even more options for our audiences," Shattuck said. The weekend afternoon performance of "The Emperor's New Clothes" is scheduled for July 5, with "The Glass Menagerie" set for Sunday, July 12, at 2 p.m. "We've also added one 'early-to-bed' 6:30 p.m. curtain time for 'The Glass Menagerie' on Thursday, July 16, for those who don't want to stay out late mid-week," he continued.

Two "Pay-What-You-Can" performances, sponsored for the third year by the Nacogdoches Walmart store, allow audiences to choose the amount they pay for admission, Shattuck explained.

"'The Glass Menagerie' is one of the most popular stories ever written for the American stage," according to Shattuck. "Many of us have read it in school or seen it onstage somewhere, and it recently had a sensationally successful Broadway revival, reminding us of how much people love to return to visit the Wingfield family.

"In the end, 'The Emperor's New Clothes' is a story about how much we need children's genuine sincerity to keep us honest and sane," Shattuck said. "There's a great lesson there for kids and adults alike, and the rockin' score of this version makes learning just as fun as can be."

"Around both shows we hope to create a true festival atmosphere - a refreshing destination that will make an ideal break from the summer sun," Shattuck said. "Before performances of 'The Glass Menagerie' we'll have rock and folk played live outdoors by favorite local musicians, including Charlie Jones, Jon Hall, Mark McLain, Marshall Hance and The Mellows. Before 'The Emperor's New Clothes,' the cast will entertain outside as well."