SFA School of Theatre to present 'The Arabian Nights' 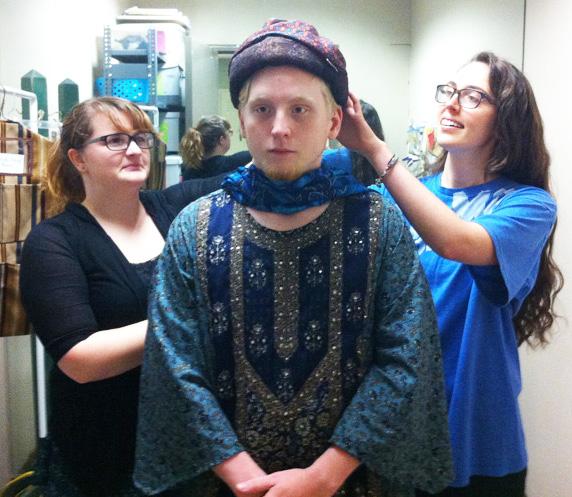 Kathleen Easterling, right, assistant costume designer, and Cloey Hammonds, costume assistant, work on fitting a costume for Greg Albright, who plays the Wazier in the School of Theatre's production of Mary Zimmerman's "The Arabian Nights," slated for Oct. 6 through 10 in Turner Auditorium on the SFA campus.


NACOGDOCHES, Texas - Audience members who attend the Stephen F. Austin State University School of Theatre's production of "The Arabian Nights" Oct. 6 through 10 will find themselves "on an enchanted journey to places far away and times long ago."

The play by Mary Zimmerman celebrates the connection between storytelling and life itself, according to Scott Shattuck, director of the School of Theatre and of the play.

"The vast collection that gave us 'Sinbad the Sailor' and 'Aladdin and His Magic Lamp' is also full of stories that are surprisingly sophisticated, sexy and hilarious," Shattuck said.

And who isn't intrigued by the story of Scheherezade, a woman who humanizes a monstrous mass-murderer by telling him stories and saves her own life in the process?

"It's a story about the joy and importance of storytelling, and one that equates the idea of a story with life itself," Shattuck said. "That's irresistible to a dyed-in-the-wool storyteller like me."

That's one reason Shattuck selected "The Arabian Nights" to be included in this year's School of Theatre's Mainstage Series. Another reason is how different this play is from the others to be produced this year. Other 2015-2016 Mainstage selections include William Shakespeare's "Macbeth," Bruce Norris' "Clybourne Park" and the biennial "Festival of New American Plays."

The stories in "The Arabian Nights" are drawn from cultures all over the Far East, the Indian subcontinent, the Middle East, and North Africa, so this play gives student actors and production staff a unique insight into cultures with which they may be unfamiliar, Shattuck said.

"Much more than that, the story-theatre nature of this play gives the student actors an opportunity to develop creative movement, physical imagery, and multiple characterizations to make the stories as vivid as possible for the audience," he said.

Although various animated and picture-book versions have left the impression that the stories of "1,001 Nights" are for children, in fact, many of them are very sophisticated and some get great humor from sexual innuendo, Shattuck said. For this reason, the play is recommended for mature audiences.

In addition to lovers of storytelling, the production will appeal to those that enjoy beautiful and elaborate costumes, sumptuous scenery and colorful lighting, he said. The play is also extraordinarily complex, being made up not only of stories within stories within stories, but also of songs, dances and "spectacle of various kinds," Shattuck said.

"None of this is my specialty, so I'm especially grateful to have a wonderfully creative cast and team," he said.

"Audience members at this show will find themselves on an enchanted journey to places far away and times long ago," Shattuck said, "and the most surprising things they will find there are humor and fun that are as fresh as today because they are so universally human."