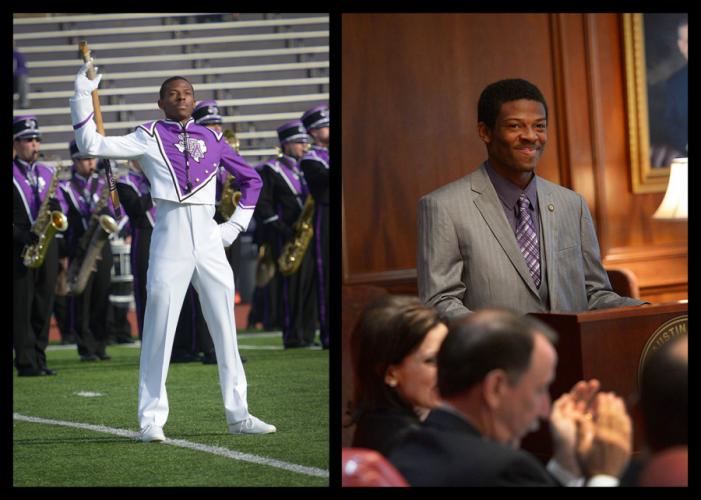 Harris' leadership will be broadcast nationwide as the LMB makes its debut at about 10:06 a.m. CST in this year's Macy's Thanksgiving Day Parade in New York City.

During the past year, Harris has become well known across campus as drum major. He has been a member of the LMB since his freshmen year, and he also marched in 2012 in the London New Year's Day Parade. He is believed to be the first SFA drum major not majoring in music. Harris is a political science major and is involved in various organizations on campus, including the Purple Haze Association, Pre-Law Society, Phi Alpha Delta, Beta Gamma Omega and Tau Beta Sigma.

"I always knew I wanted to be in marching band in college, and ultimately, I knew I would like to be drum major," Harris said. "Through hard work, dedication and trust from the members of the LMB, I have achieved these goals."

A native of Hallsville, Texas, Harris is no stranger to SFA. Throughout high school, he visited the campus for band events and knew he would eventually become a Lumberjack.

"My high school is big on school spirit, and I never thought SFA could rival the intensity of it, but that changed when I came to orientation and joined the LMB. When I first heard the LMB play the school song, it was a magical experience because I saw the dedication they have for this school," Harris said. "The school spirit is so overwhelming that you just drown in it. That's when I knew SFA was the next level of my education and my home away from home."

Harris has played baritone for about seven years after volunteering in eighth grade to give up his position as a trumpet player.

"My band director needed more baritone players in a piece of music we were playing in eighth grade. He looked at the trumpet section and said, 'I need about two or three of you to play baritone.' Each one of us was thinking, 'We don't want to do that,'" Harris said. "So after a long awkward silence, the director said, 'We don't have time for this; I'm going to start pointing at people randomly.' At that moment, I looked at everyone in the section sitting there defiantly, then I raised my hand."

While this switch was only meant to last a semester, Harris never returned to the trumpet and does not regret volunteering.

"I never thought that raising my hand and not shying away from the road less traveled could have such an impact on my life," he said.

When Harris is not busy working with hundreds of LMB members, he is acting as SGA president.

Earlier in 2015, Harris decided to run for SGA president with the goal of making sure students' voices, concerns and ideas were heard.

"Many times people identify a problem or have an idea to make SFA better, but they do not have the determination to work through the red tape. I ran for those people. I ran to lead this organization to make sure that it would grow to be better than it is today and continue to grow after I graduate," Harris said.

Since he was elected SGA president in April, Harris has hit the ground running to take SGA in a different direction. He wants SGA to be more relevant to students.

Some of Harris' initiatives include using social media more to engage students, creating a board to help students voice their concerns, introducing the True Lumberjack initiative to amplify school spirit, and much more.

To balance both positions, Harris has doubled down on his scheduling and organization. He believes these roles are teaching him lessons he couldn't learn in the classroom and are helping him apply his knowledge to real-world situations.

"Real-world experience is a great asset to have for any profession. Plus, you may see me running for public offices in the future," Harris said.

Whether he is leading the band at half time or in a SGA meeting, Harris believes "a good follower makes a good leader." He said it is essential to listen to everyone, welcome opposing ideologies, compromise, listen to all sides of the story before making statements, follow through with critical decisions, keep the organization's best interests in mind and meet problems with solutions instead of excuses.

"I've realized how far I have come as a person and a leader. I have learned how to articulate my ideas to others, how to respectfully disagree with people, how to compromise with others, how to speak with others, and so much more," he said. "I still have so much to learn. These leadership roles are refining me to bring out the best."