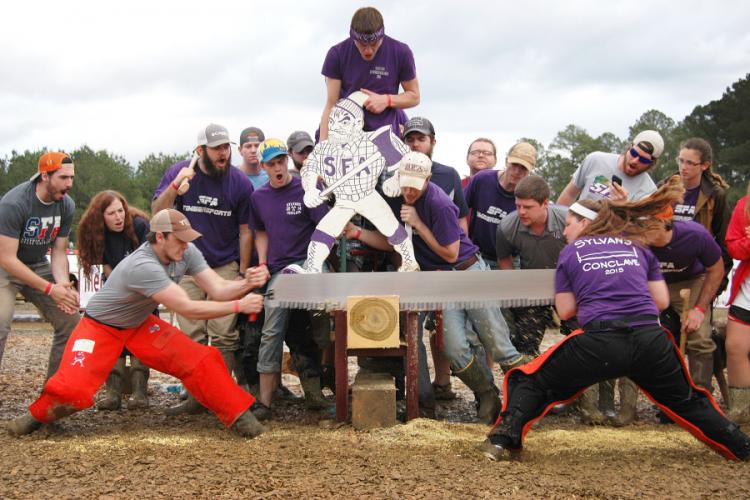 The team of 35 students, composed primarily of forestry majors, competed in technical and physical events against 14 other Southern forestry schools, including Virginia Tech, Clemson, Auburn and Louisiana State University.

Dr. Jeremy Stovall, assistant professor of silviculture in SFA's Arthur Temple College of Forestry and Agriculture and the Sylvans' faculty adviser, said the rigorous coursework undertaken by students in SFA's forestry program is a key component of the team's success.

"Stephen F. Austin has one of the best undergraduate forestry programs in the country," Stovall said. "This really helps with the technical events, which are mostly focused on coursework in subjects like dendrology, wildlife, wood technology and timber estimation."

In addition to the technical portion of the event, students compete in traditional physical timbersport events such as crosscut sawing, log birling, archery, axe throwing and pole climbing.

To prepare for these physical events, the Sylvans practice daily in the weeks leading up to the competition. During the semester, members are often found practicing events and providing teammates with performance critiques and encouragement in the designated practice area, located behind the Forestry Building.

"This was the best-rounded team I have seen," Stovall said. "We had 18 different individuals compete in the 22 events, each working hard at perfecting his or her event."

Out of the 15 competing schools, SFA won first in both technical and physical events, with an overall score of 317.25 points. Clemson finished in second place with 269.5 points, and the University of Georgia finished third with 268.5 points.

The Forestry Conclave is an annual competition between forestry schools of the Southeast featuring both technical and physical timbersport events. Next year's competition will be hosted by Clemson.

For information about the Arthur Temple College of Forestry and Agriculture, visit www.atcofa.sfasu.edu.