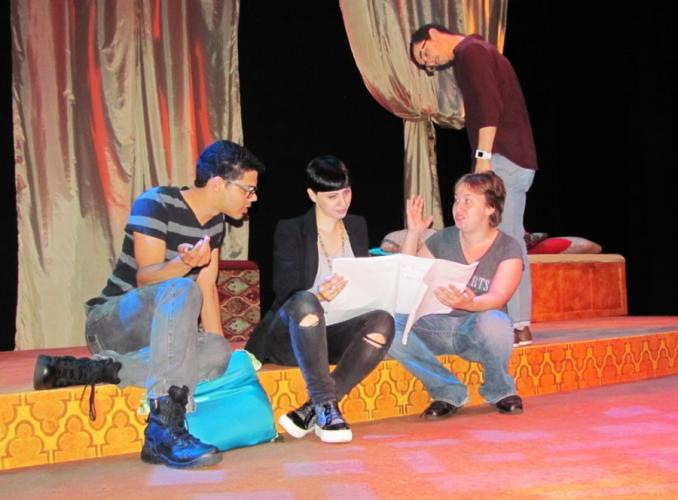 The School of Theatre takes pride in providing the kind of curriculum and hands-on experience that gives each student a diverse skill-set. The school also cultivates internships and international programs to enhance what the students learn at SFA.

Three theatre students will put the knowledge and experience they acquired while studying in different programs in Europe to work in the upcoming production of Mary Zimmerman's "The Arabian Nights." Amanda Warren, Molly Dyer and Josh Wallace spent last year in Europe participating in various programs that are part of the SFA-Rose Bruford College of Theatre and Performance international exchange initiative.

Warren, a Nacogdoches senior, is lighting designer for "The Arabian Nights," and she is planning "some interesting things to bring color and sculptural shape to the show," said Scott Shattuck, director of the School of Theatre and of the play. "We're getting her some innovative, state-of-the-art equipment with which to do it," he added.

A Central Heights High School graduate, Warren is completing her final semesters at SFA and is "doing the work of a professional designer," Shattuck said. Her overall goal in designing lighting for "The Arabian Nights" is for the audience to "experience a clear separation between the stories and reality," she said.

In the play, the murderous king Shahryar is gradually humanized by the storytelling of one of his intended victims, the legendary Scheherazade, who becomes his wife.

"I want to show the stark contrast between Shahryar's colorless, shapeless world and the worlds that Scheherazade breathes life, dimension and color into," Warren said. "Throughout the journey, the world of reality will become more colorful as Shahryar falls into the stories."

In order to create the contrast of worlds, Warren said she gathered inspiration from oil paintings of the Middle East.

"When the stories are being told, the goal is to make the audience feel as if they are looking inside a painting and seeing the actors bring it to life," she explained. "With the use of dance lighting techniques, I plan to sculpt the actors, giving them more dimension, which will act almost as a pop up painting."

Through her work on the upcoming SFA production, Warren said she hopes to sharpen her analytical skills as a designer.

"This is the first production in a very long time where I've had a clear design concept," she said. "My time at Bruford helped sharpen my skills as a designer, and I am happy to put those skills into practice."

Dyer, Copperas Cove senior, who will assume the role of Scheherazade in "The Arabian Nights," described her year abroad as "the most challenging of my entire academic career."

Her studies in the European Theatre Arts program took place in three parts, the first of which was spent in London, learning about Greek and Spanish culture and how those cultures were expressed in individual modes of performance.

Dyer then spent three months in Tallinn, Estonia, where she was immersed in voice classes and stage movement classes, an intense gymnastics class, and an in-depth acting class in the Stanislavsky technique. Her last term was spent back in England where her focus was entirely on directing and designing a single scene from a play originally written in a foreign language.

"This proved to be the toughest term of them all, as we not only were expected to direct the scene but further manipulate the source material with other influences so as to create an original production," she said. "This secondary source material was then used in the portion of the semester when we designed an entire production concept - lights, sound, costume, everything down to the specific theatre space we wanted to use."

Dyer's year at Rose Bruford was spent primarily "devising" work, or using text as a starting point and creating an original work from it.

"I wouldn't go as far as saying that I have become conditioned to that mode of theatre," she said, "rather, I'm now comfortable with it. I've been in a handful of Mainstage productions, but I've never really had a speaking role before. This will be a huge jump for me!"

Dyer said she quickly came to realize that Shattuck's intention with the play was to "create a cast of storytellers, and that's when everything came together for me." She said she plans look to her work in Estonia the most when considering the script and the character of Scheherazade.

"There, I was taught to understand the value of the humanity in a character, and finding their 'truth' as a person rather than an idea or a metaphor," Dyer said. "When I first looked at this script, it came across as a jumbled mess of nondescript characters and tangled tales. But the more time I spent with it, reading it over and over and analyzing all of the inter-relationships, I came to a realization: all of these characters that Scheherazade introduces are actually extensions of herself. They're beautiful, vivid, and creative wonders that come to life to entertain and enchant."

"The play then, I find, takes on a whole other dimension of meaning," she said, "not only for me but for each person, including the cast and crew and audience. It's something very special."