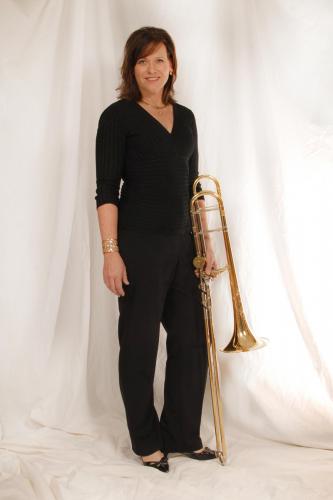 The performance is a feature of the SFA School of Music's Cole Performing Arts Series.

"Each piece is uniquely different," Scott said of the program, "particularly the 'Sequenza V' by Luciano Berio, which is one of the most difficult solos ever composed for trombone."

The program will also feature "Colloquy" by William Goldstein, which is a one-movement piece composed for wind ensemble and solo trombone using elements of jazz to balance sections of lyrical melodies with exciting technique, Scott said.

"There will be a special appearance of the famous European clown, Grock," she added, "performing the somewhat controversial piece 'Sequenza V.' This musical theater piece by Berio uses 'extended techniques' for trombone, including circular breathing and multiphonics to create sound imagery."

The recital will end with the well known "Flight of the Bumblebee" composed by Nicolai Rimsky-Korsakov in 1899 and arranged for trombone by Christian Lindberg.