SFA's A Cappella Choir to perform collection of tour music 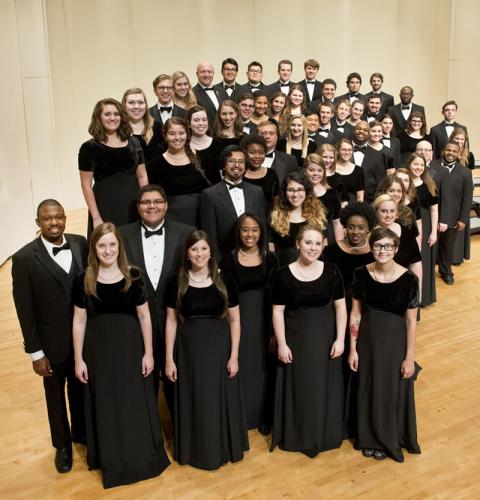 The SFA A Cappella Choir will present "Trailers and Previews: A Collage of Tour Music" at 7:30 p.m. Friday, March 6, in Cole Concert Hall on the SFA campus.


NACOGDOCHES, Texas - The Stephen F. Austin State University College of Fine Arts and School of Music will present the A Cappella Choir in concert at 7:30 p.m. Friday, March 6, in Cole Concert Hall on the SFA campus.

The program, titled "Trailers and Previews: A Collage of Tour Music," will "trailer" music from the ensemble's regional tour of East Texas and "preview" some of the new music the choir will learn for an upcoming tour of Italy, according to Tim King, director of choral actities at SFA.

"The A Cappella Choir has a tremendously active semester," King said. "We recently toured high schools within the East Texas region sharing the musical goodwill of SFA's music program.

"On April 14, we will sing the Bruckner E minor Mass with our Wind Ensemble, and on May 8, we will combine with the other choirs and our SFA Orchestra of the Pines to perform one of the greatest masterworks, the Brahms 'Requiem,'" he said. "And of course, there is our Giro d'Italia in May."

The choir will travel to Italy in May for an 11-day performance tour that includes special invitations to sing at the Vatican and St. Mark's Basilica.

"The tour has received a special invitation to sing for Sunday mass in the Vatican, and also at St. Mark's Basilica in Venice, as well as at concert venues in Marostica, Santa Croce Basilica in Florence, which is the final resting place of Michelangelo, Galileo, Machiavelli and Rossini," King said. "We will also perform at All Saints Church in Rome."

Among the selections to be performed at the March 6 concert are "Chariots" by the South African composer Peter Louis van Dijk and "Agnus Dei" by American composer Samuel Barber.

"This is Barber's personal choral arrangement of his 'Adagio for Strings,'" King said.

"This highly dramatic song by Tormis is based on the Finnish legend about iron and how it was intended for good." King explained. "However, modern man has used iron for evil warring purposes."