SFA's A Cappella Choir prepares for concert tour in Italy 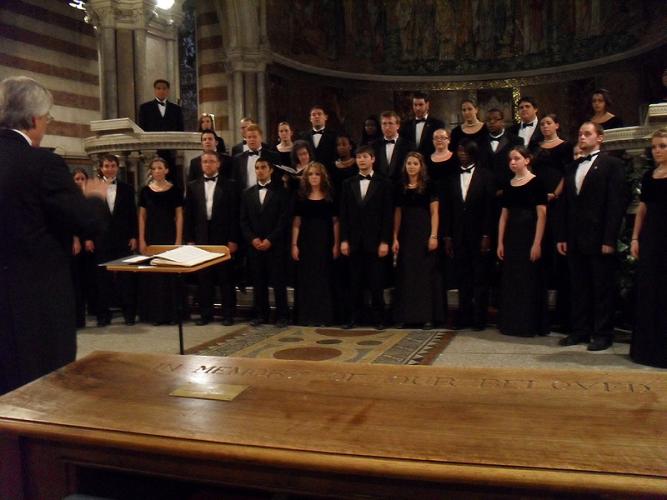 The SFA A Cappella Choir performs at St. Paul's Within the Walls, Rome, in this file photo from 2009. The choir will return to Italy this week to sing at the Vatican and St. Mark's Basilica, among other historically significant venues.


NACOGDOCHES, Texas - Stephen F. Austin State University's A Cappella Choir leaves Friday for a concert tour of Italy that will include performances at the Vatican and St. Mark's Basilica, among other historically significant venues.

"This performance tour will highlight to European audiences our students' artistry and SFA's musical excellence," said Dr. Manny Brand, director of the SFA School of Music.

The choir makes a triennial European trip to visit musically historic places that SFA's music students read about in their studies, according to Tim King, director of choral activities at SFA.

"This year, it happens to be to Italy," King said. "We will sing at St. Peter's Basilica, the Vatican, for Holy Trinity Sunday; St. Mark's Basilica, Venice, for Pentecost; and The International Choral Festival in Marostica, Italy, to highlight a few performances."

SFA has a strong history of providing valuable opportunities for students outside the classroom, and this trip is another illustration of the university's commitment to student success. Additionally, students will tour Ancient Rome, including the Vatican Museum and the Catacombs, the Accademia Gallery in Florence, and side excursions to Pompeii and Siena.

"The Vatican is certainly an important event," King said. "Educationally, Venice and Florence are so important. One of the birthplaces of Baroque music is St. Mark's Basilica in Venice. This is where such great composers as Monteverdi, Gabrieli and de Rore worked.

"To sing in the same places where these giants of music performed is awe-inspiring," he said. "Of course, Florence is the very birthplace of the Renaissance. To see Michelangelo's David, to view Florence from the top of the Duomo, to see the works of Brunelleschi and Alberti … one could go on and on!

"World travel opens a young person's eyes, and when it is to places that they have read about in their musical studies, it makes ever so much more personal," King said.

One of the more rewarding aspects of these tours is when King hears the comments his students make after they have sung so well in the historic places.

"I want our audiences to appreciate our great music," he said. "It is the music that tells the story about us, not what we say."

King said he is appreciative of the support the choir has received at the university level, around the community and across the state.

"I want the entire Nacogdoches community and supporters across the state to know how much we appreciate their efforts in our behalf," he said. "They have been so giving. We could not make this happen without them, nor would this be possible without the support of SFA Provost Dr. Ric Berry."