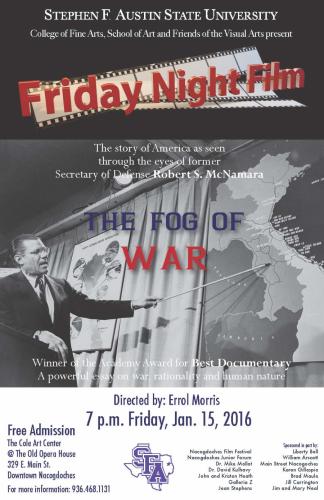 Errol Morris' "The Fog of War" will kick off the spring semester's Friday Night Film Series at 7 p.m. Friday. Jan.15.


Opportunities to attend fine arts events are plentiful on the Stephen F. Austin State University campus. From concerts and recitals to plays and art exhibitions, there is truly something for every taste and interest in art, music and theatre.

Among the more popular offerings are the free one-night film screenings on the first Friday night (there are occasional exceptions because of holidays) of each month presented by the SFA School of Art and Friends of the Visual Arts at The Cole Art Center @ The Old Opera House.

Kicking off the spring semester's list of films is Errol Morris' "The Fog of War" at 7 p.m. Friday. Jan. 15. Described as the story of America as seen through the eyes of former Secretary of Defense Robert S. McNamara, one of the most controversial and influential figures in world politics, "The Fog of War" shows an insider's view of the seminal events of the 20th Century, according to information at errolmorris.com.

Showing Feb. 5, "What Happened, Miss Simone?" is the 2015 biographical documentary about Nina Simone, a classically trained pianist, dive-bar chanteuse and black power icon dubbed the "High Priestess of Soul," according to information at ninasimone.com.

The life and work of Brazilian photographer Sebastião Salgado is showcased in "The Salt of the Earth" on March 4. For the past 40 years, Salgado has traveled through the continents witnessing major events of history - international conflicts, starvation and exodus. This film by his son, Juliano Ribeiro Salgado, and Wim Wenders, chronicles his quest to discover pristine territories, wild fauna and flora and grandiose landscapes as part of a huge photographic project as a tribute to the planet's beauty, according to information at imdb.com.

Filmed over seven years, "The Shadow of the House" is an intimate portrait of photographer Abelardo Morell, revealing the mystery and method of his artistic process. Morell will serve as the juror for the 2016 Texas National Competition and Exhibition of the School of Art. This film by Allie Humenuk, to be screened April 1, skips across time and space from Morell's early childhood escape from Castro's regime to his status as a world-renowned photographer. The film explores his daily working life as an artist and his eventual return to Cuba after 40 years of living in exile, according to imdb.com.

The May 6 film is "Ida," a Polish drama directed by Pawel Pawlikowski that won the 2015 Academy Award for Best Foreign Language Film. Anna, a young novitiate nun in 1960s Poland, is on the verge of taking her vows when she discovers a dark family secret dating back to the years of the Nazi occupation, according to .