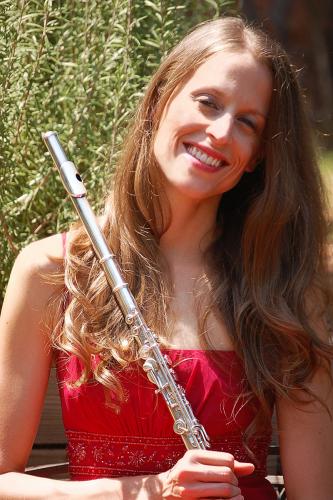 
NACOGDOCHES, Texas - Christina Guenther, associate professor of flute at Stephen F. Austin State University, will celebrate 10 years of teaching at SFA with a recital that features her performing with colleagues and former students.

"Additionally, I will be joined by more than 15 alumni from the last decade who are coming back to SFA to perform with me on the final piece," Guenther said. "This will be a great way to celebrate their successes since graduation, as well as the growth and success of the SFA flute studio."

On the morning of the concert, the alumni and current flute students will gather for "a fun studio event, allowing old and new to meet, play together and exchange ideas," Guenther said.

Among the program pieces are Carl Philipp Emmanuel Bach's "Hamburger Sonata," which Guenther will perform with Fung. Guenther describes CPE Bach as Johann Sebastian Bach's "most famous son, who composed during the transition period between Baroque and Classical, writing in what is known as the Sensitive Style (known as Sturm und Drang in literature and the arts)."

"One of our only true Romantic sonatas, this piece depicts the story by Friederich de la Motte Fouque of the water nymph Undine, who, in order to obtain a soul, has to procreate with a human," Guenther said. "This piece depicts the tumultuous love affair between Undine and the knight, Huldebrand, with storms and a love theme thoroughly depicted in both instrumental parts."

The Stone Fort Wind Quintet will perform Hungarian composer György Ligeti's "Six Bagatells for Woodwind Quintet." Concluding the concert will be a performance of Antonio Vivaldi's "Concerto La Primavera" for solo flute with flute choir, in which Guenther will be joined by SFA alumni with Allen conducting.

"One of Vivaldi's 4 Four Seasons concertos, this arrangement of 'La Primavera' for solo flute and flute choir will be a fun closer to this 10th anniversary celebration," she said. "I will be joined in these three well-known movements by my alumni from the last decade in the flute choir. It is an honor to welcome them back to perform with me."

Following the concert, there will be a reception in the Cole lobby.