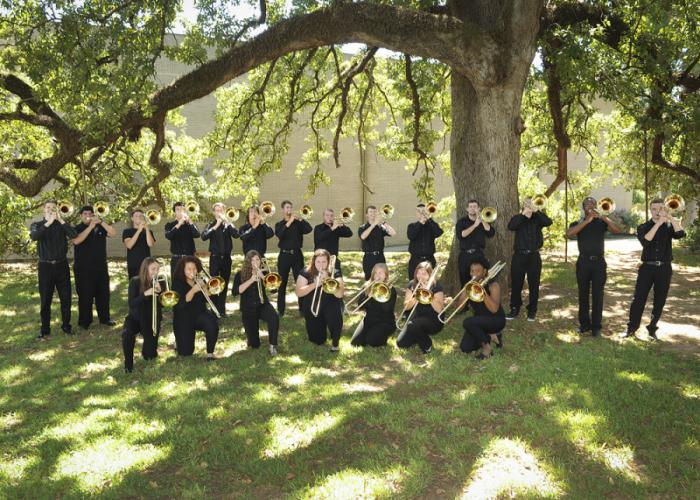 The Stephen F. Austin State University's Trombone Choir will perform on Thursday, Nov. 12 at 7:30 p.m. in Cole Concert Hall in the Wright Music Building on campus.


NACOGDOCHES, Texas - The Trombone Choir at Stephen F. Austin State University will perform a recital at 7:30 p.m. Thursday, Nov. 12, in Cole Concert Hall in the Wright Music Building on the SFA campus.

Directed by Dr. Deb Scott, professor of trombone, the 22-member choir will perform "Canzona XIII," composed by Giovanni Gabrieli in the 16th century for St. Mark's Cathedral in Venice.

"This piece will feature three choirs of all trombones, including the contra bass trombone, which plays in the range of the tuba," Scott said.

Two other sacred pieces that Scott described as "beautiful chorales" are on the program, including "Ave Maria" by Anton Bruckner and arranged by Douglas Yeo, and "Holy is God the Lord" by Felix Mendelssohn.

The concert will also feature a piece by Dmitri Kabalevsky.

"Overture to 'Colas Breugnon' is a lively fun piece composed originally for an opera orchestra by Kabalevsky and arranged for trombone choir by Gary Slechta," Scott said.

The recital a joint presentation of the College of Fine Arts and School of Music and is part of the Cole Performing Arts Series.