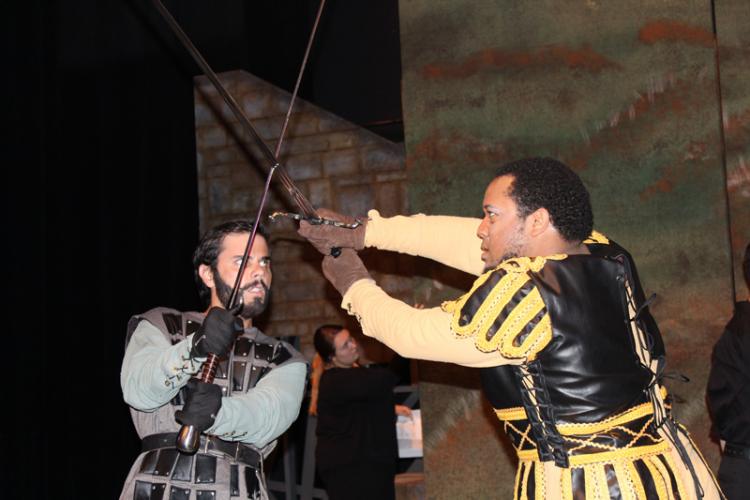 SFA theatre students Keenan Chaisson, left, as Macduff and Dominique Rider as Macbeth engage in a fight scene in the School of Theatre's production of Shakespeare's "Macbeth."

This play by William Shakespeare is often produced because of the theatrical elements that are present: drama, betrayal, love and murder. In SFA's production of "Macbeth," all of these components are highlighted with exciting fight sequences, powerful dance choreography and gripping fake bloodshed.

In the weeks leading up to the play's Nov. 17 opening, hours of research, rehearsal and preparation were put into the show. Kate Shirley, a junior theatre major at SFA and the choreographer of this production, described her process.

"There were so many unpredictable elements, and we often found that the choreography I created didn't work the way I imagined," she said. "I had to rethink and reinvent and reteach on a moment's notice. I was so lucky to have such cooperative, enthusiastic dancers."

Likewise, it takes hours of sword-fighting practice to perform fight scenes without actually injuring another actor. The swords and daggers seen on stage are real and heavy. However, the experienced actors swing them with ease.

"When doing a show like 'Macbeth' that's heavy on exciting staged sword combat, we want the fights to tell part of the story through believable, captivating and epic means," explained senior theatre major Chipper Morris, who plays the part of Malcolm in "Macbeth" and functions as the show's fight captain.

"We slowly work through the technicalities of the fights step by step to ensure that, when performing at full speed, the actors are fully comfortable with their fight partners and the choreography while feeling as safe as they can," Morris said.

Safety is an important part of every production, but with a play as macabre as "Macbeth," there has to be blood to make it look authentic.

"Although it's kind of a mess to clean up, the blood definitely adds a whole new layer to the play," said Shelby Barrette, a freshman theatre major who works as an assistant stage manager on this production. "Without giving too much away, this aspect of the play is gruesome."

The School of Theatre's Mainstage Series is sponsored in part by Tipton Ford.