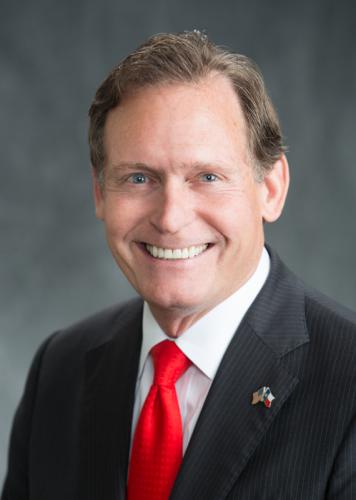 Serving his fifth legislative term, Zerwas represents the Texas House of Representatives' District 28, which includes northwestern Fort Bend County, one of the fastest-growing regions in Texas. He serves as chairman of the House Committee on Higher Education and is an advocate for increasing access to higher education and growing opportunities for graduate medical education.

Zerwas earned his bachelor's degree from the University of Houston and his doctoral degree in medicine at Baylor College of Medicine. He has been a physician for more than 30 years and is one of four medical doctors in the Texas House of Representatives. Two of Zerwas' sons, Brandon and John Jr., graduated from SFA.

Zerwas serves on the Committee on Public Health, where he offers firsthand experience and knowledge of health-care systems and policy. He is past-president of the American Society of Anesthesiologists and co-founded a Houston-area group practice that recently became part of U.S. Anesthesia Partners. Zerwas remains active in the partnership operations. Previously, he acted as president of the Memorial Hermann Health Network Providers and served as chief medical officer for the Memorial Hermann Hospital System.

Recently, the Biotechnology Industry Organization recognized Zerwas as "BIO Legislator of the Year" for writing critical legislation that will preserve patient access to innovative and cost-effective biologic medicines in Texas. Zerwas also has earned numerous accolades for his dedication to public service, including being named one of the "Ten Best Legislators" by Texas Monthly twice and receiving the 2014 Coalition for Texans with Disabilities Award and the 2014 American Cancer Society Cancer Action Award.

Master's and doctoral candidates will graduate with their respective colleges, and Zerwas will provide the commencement address at both ceremonies.