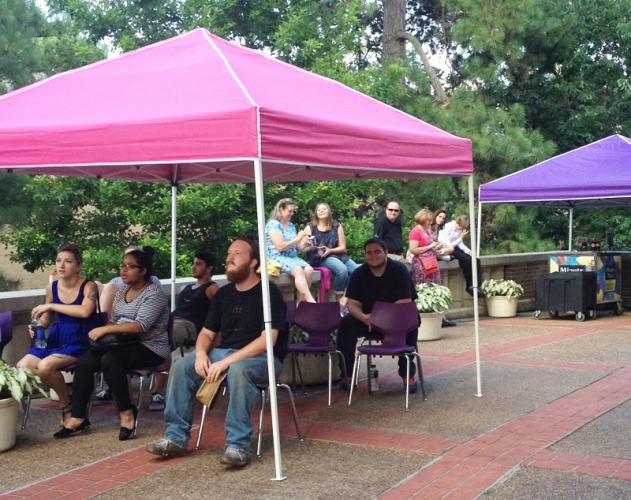 Audience members at the 2014 SummerStage Festival at SFA enjoy pre-show entertainment. This year's festival opens Friday, June 26, with a performance of Tennessee Williams' "The Glass Menagerie." The festival runs through July 17.


NACOGDOCHES, Texas -The lineup alone is enough to generate enthusiastic audiences at this year's SummerStage Festival at Stephen F. Austin State University: "The Emperor's New Clothes: The Musical" by Karen Boettcher-Tate and Bill Francoeur and "The Glass Menagerie" by Tennessee Williams.

But in addition to featuring a popular high-energy children's show and an American classic play, this year's SummerStage Festival offers coupons for daily discounts, "pay-what-you-can" performances, sweet treats and live music, all on top of the opportunity to see live theatre.

It's a combination that's hard to beat for families looking to have summertime fun together and not spend a fortune doing so.

"Our audiences had a ball with the free live concerts before evening and weekend performances last summer," said Scott Shattuck, director of the SFA School of Theatre, "and this year, we've got another great lineup of pre-show entertainment under our colorful shade tents right outside the main entrance to Griffith Fine Arts Building."

"The Emperor's New Clothes: The Musical," one of the world's most beloved children's stories, is freshly enhanced with original songs in various pop styles. Hans Christian Anderson's short tale is about two mischievous swindlers who persuade a vain emperor that they can outfit him in a suit so glamorous that it's invisible to fools. When he falls for their scheme, the results are hilarious.

"The Glass Menagerie," the story that launched Williams' career as America's greatest playwright, revolves around the unforgettable characters of faded southern belle Amanda Wingfield, her daughter Laura, who is as fragile as the shimmering animals of the title, Laura's compassionate but frustrated brother Tom, and the "gentleman caller" that rocks their delicately balanced world.

SFA theatre patron Gary Pankratz has long enjoyed the live performances on the W.M. Turner stage. He said this year's SummerStage lineup is one of the best ones yet.

"As far as entertainment in East Texas, SFA's School of Theatre is the best kept secret," Pankratz said. "Like many, I have traveled to larger cities to see Broadway plays. SFA Theatre has 75-to-80 percent of the quality and 5-to-10 percent of the cost compared to big-city shows. It's hard to find a better value than that, and you can sleep in your own bed the same night."

And for families on a tight budget, the Nacogdoches Walmart store is making it possible to bring everyone to the shows. Two "pay-what-you-can" performances, sponsored for the third year by Walmart, allow audiences to choose the amount they pay for admission, Shattuck explained.

"Around both shows we hope to create a true festival atmosphere - a refreshing destination that will make an ideal break from the summer sun," Shattuck said. "Before performances of 'The Glass Menagerie' we'll have rock and folk played live outdoors by favorite local musicians, including Charlie Jones, Jon Hall, Mark McLain, Marshall Hance and The Mellows. Before 'The Emperor's New Clothes,' the cast will entertain outside, as well."

To complete the experience of summer fun, the Box Office offers coupons for a discount off dining at Maklemore's Ale House and Bistro before or after any performance. The restaurant is located at 2304 North St., within easy walking distance of the performance venue. For visitors from out of town, a discount coupon is also available for lodging at Days Inn Nacogdoches, which is also located close to campus.