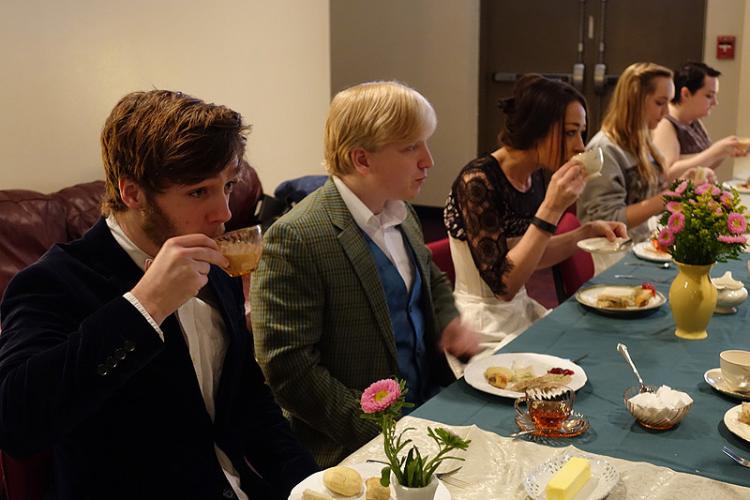 "The Importance of Being Earnest" cast members, from left, Jason Trevino, Greg Albright, Shelby Gilliam, Sloan Frierson and Mary Collie participate in a formal tea to prepare for their roles in Oscar Wilde's comedy of manners to be presented by the SFA School of Theatre at 7:30 nightly March 3 through 7 in W.M. Turner Auditorium on the SFA campus.


NACOGDOCHES, Texas - The staging of a formal afternoon tea provided an exercise in Victorian manners for Stephen F. Austin State University School of Theatre students preparing for their roles in the upcoming performance of Oscar Wilde's "The Importance of Being Earnest."

Because tea is served three times during the play, director Jack Heifner, SFA's playwright-in-residence, wanted to make sure the student actors served it properly. Heifner and his assistant director, Nacogdoches senior Sarah Chavez, searched for a local restaurant or tearoom that served afternoon tea.

"When we couldn't find a place close by, we decide to have one ourselves," he said.

Students attended the tea in character - men dressed in suits and hard-soled shoes, women dressed in skirts, heels and corsets - and were judged on their posture, manners and etiquette.

"We dimmed the lights and laid out the tablecloth, fine china and flowers to capture some of the ambiance of the Victorian period," Chavez said. "After they had been seated, the production crew and myself acted as the servants. We followed the proper order to serve tea and attended to the actors as needed. The actors spoke in their accents and made conversation as their characters. It was amazing how seriously everyone took on their roles, from the actors to the production crew, and it really was a lovely and educational event."

Long before rehearsals began, Chavez compiled a packet of information that detailed the etiquette and manners of the period, and a significant portion focused on the history and procedure of taking tea.

"From there, we researched the kind of food that would be served as well as the proper order in which it was consumed," she said. "Our stage manager, Connor Clark (Garland senior), as well as assistant stage managers, Bud Odom (Brownsboro sophomore) and Taylor Dobbs (Baytown sophomore), played crucial parts in helping me organize and carry out the tea."

With its high farce and witty dialogue, "The Importance of Being Earnest" is considered Wilde's most popular play. This comedy of manners highlights Victorian etiquette that may seem foreign to today's college student, but Heifner says his students have "welcomed the knowledge."

"Nothing is difficult for students to grasp when they know it is for the benefit of the play and for their characters," he said.

It's one thing for actors to be lectured about proper etiquette and another for them to actually experience it, according to Chavez.

"By having the tea, the actors were able to put what they had learned to practice, and their characters really came to life," she said. "We live in an age where society is growing excessively casual, and people are forgetting the decency of manners. Part of the fascination in this show lies in the etiquette of the time. What seems so proper and formal to us was instinctive, everyday behavior for these characters. I think the actors walked away with a greater appreciation for the play as well as an understanding of etiquette and its importance even in today's society."

"It has been fun for them, and they have enjoyed it," Heifner said of what the students are learning from the play. "Certainly we aren't accustomed today to standing up when women enter the room, but there is nothing wrong with the practice. Being courteous never goes out of style."

Show times are 7:30 nightly Tuesday through Saturday, March 3 through 7, in W.M. Turner Auditorium on the SFA campus. A special school-day matinee will be at 10 a.m. Thursday, March 5. Tickets are $15 for adults, $10 for seniors and $7.50 for students/youth. For tickets or more information, call the SFA Fine Arts Box Office at (936) 468-6407 or visit theatre.sfasu.edu.