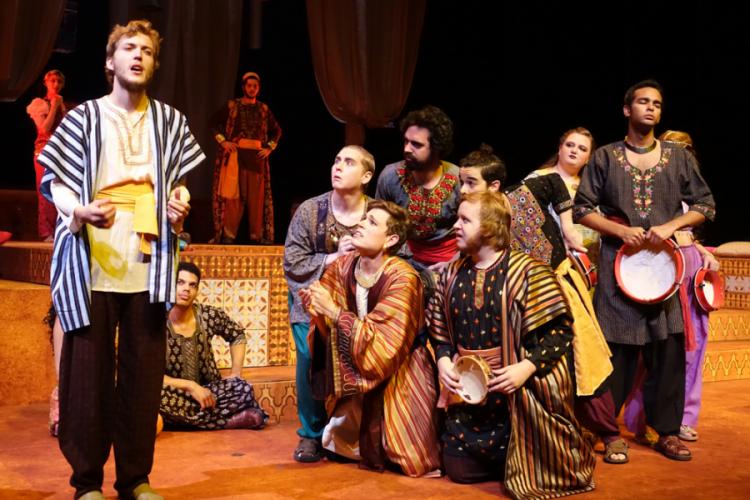 Attention to differences in Middle Eastern cultures is apparent in costume, hair and makeup designs in the SFA School of Theatre's production of Mary Zimmerman's "The Arabian Nights," showing at 7:30 nightly through Saturday, Oct. 10, in Turner Auditorium on the SFA campus.


NACOGDOCHES, Texas - Cast and production staff members of "The Arabian Nights," the Stephen F. Austin State University School of Theatre's current Mainstage Series play adapted from "The Book of the Thousand Nights and One Night," have learned a lot about the Far East, the Indian subcontinent, the Middle East and North Africa.

In the weeks leading up to the play's Oct. 6 opening before enthusiastic crowds, students and their teachers explored cultures with which many were unfamiliar. But theatre professor Angela Bacarisse, who designed costumes, hair and make-up for the play, and her hair and make-up assistant designer, student Samantha Friedrich, each brought unique insights to the production.

As a freshman student at the University of Delaware, Bacarisse's assigned roommate was from Saudi Arabia, and through that new friendship with Farida, Bacarisse got her first "real taste" of Middle Eastern culture. But midway through that first semester, Bacarisse returned from class one day to the dorm room they shared to find Farida's father, who was an economics professor at another university in Pennsylvania, had packed his daughter's belongings and was taking her home.

"He had decided unmarried women should not live away from their fathers, and he took her home," Bacarisse said. "That was kind of shocking to me. That's when I decided I needed to know more about this culture."

The incident started Bacarisse reading about and researching the culture. When the first Gulf War broke out, Bacarisse had just started her first teaching job. The war made her want to learn even more about the Middle East so she could better explain the daily news events to her students. She also read a series of books by author Jean Sasson about the life of a Saudi princess and how women of the Middle East are treated within their countries and their own homes.

"It was eye-opening to understand the difference between someone who believes in their faith and the good things about it," Bacarisse said, "and doesn't believe in the people who are trying to kill those who don't have their faith."

Deeper reading about women like Gertrude Bell and Freya Stark, who traveled extensively throughout the Middle East and wrote about their experiences, gave her greater insight into the history of the Middle East and how the countries were shaped and divided without taking into consideration the impact dividing various religions would have.

"I developed this fascination with the culture and women's studies," Bacarisse said. "There is a lot of reverence for women as opposed to hatred for women in the culture that I don't think a lot of people realize. Part of keeping women separate is so that others don't 'steal' them. So some of the thinking is ancient, but what they do is based on reverence."

At one point during the mid-1980s, Bacarisse worked in an exclusive clothing store in Detroit where she was the only American in the workroom. Every other employee was from Iran. Bacarisse listened to the women tell their stories of escape "with only the clothes on their backs."

"These were wealthy women who left it all to break away from the ayatollah," she said.

Bacarisse and Friedrich have had many long conversations about the Middle East. As an American female growing up in the Middle East because of her father's job in the oil industry, Friedrich had to, at times, "behave in a certain way" outside the home.

Born in Texas but moving to Dubai when she was 4, Friedrich, a self-described "oil brat," spent most of her early educational years in Abu Dhabi and Saudi Arabia.

"Through living overseas, we were able to travel a lot and experience a lot of different cultures," she said. "I would love to live back overseas. The culture is so beautiful with so much loyalty and devotion to religion."

Friedrich plans to use her travels and experiences in the Middle East to create "a melting pot of cultures" for "The Arabian Nights."

SFA's production of Mary Zimmerman's "The Arabian Nights" will not be specific to one Middle Eastern culture, Bacarisse said. Rather, the play will portray and the costumes will reflect many cultures of the region. A donation of Middle Eastern clothing several years ago provides the costume backdrop for the play.

"If you do the research, you'll find that Kurdish women dress differently than Saudi Arabian women, and they dress differently than women in Yemen and women in Palestine," she said. "Since the stories in this play take place all over the Middle East and North Africa, we're not being specific. There is a sort of romanticized version of what the Middle East looks like, and it's very biblical. These are the clothes you would see in your Christmas pageant in church. But we're also pulling in the look from Disney's 'Aladdin.'"

"I want to represent the beauty the women and men have, and I want to translate that into the hair and make-up design," Friedrich said. "I loved and cherished my life there, and I want the people to be represented in a loving way."

The School of Theatre presents "The Arabian Nights" at 7:30 nightly through Saturday, Oct. 10, in W.M. Turner Auditorium on the SFA campus. Tickets are $15 for adults, $10 for seniors and $7.50 for students. For tickets or more information, call the SFA Fine Arts Box Office at (936) 468-6407 or visit theatre.sfasu.edu.