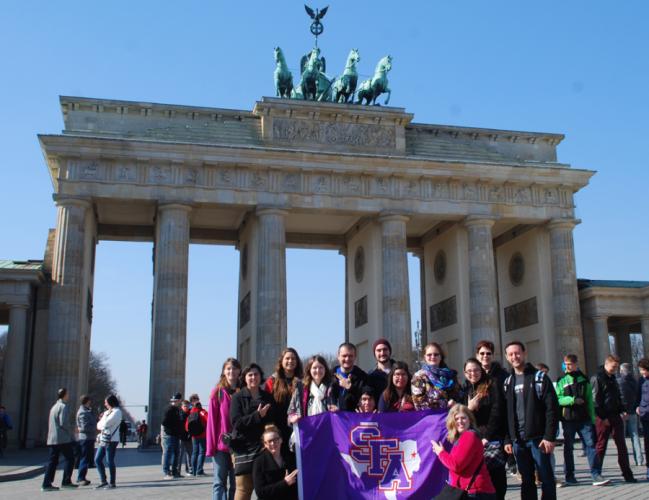 SFA students studying German who participated in a study-abroad project will present "Modern Germany Memory," a virtual museum exhibition, from 5 to 7 p.m. Thursday, May 7, in Griffith Gallery on the SFA campus.


NACOGDOCHES, Texas - A group of Stephen F. Austin State University students will present an exhibition highlighting their travels and experiences during a spring break study abroad program when they present "Modern Germany Memory," a virtual museum exhibition, from 5 to 7 p.m. Thursday, May 7, in Griffith Gallery on the SFA campus.

Students who study German with Dr. Louise E. Stoehr in the Languages, Culture and Communications Department in the SFA College of Liberal and Applied Arts traveled to Germany in March where they experienced first-hand accounts of life in both East and West Germany.

"The students witnessed the installation of a memorial to a Jewish family who had been murdered during the Nazi reign of terror, and they met with the former pastor of the Reformed Protestant Church in the city of Leipzig in the former East Germany," Stoehr said. "Leipzig is the city where on Oct. 9, 1989, demonstrators first overwhelmed the regime with their sheer mass and their peaceful marching. One month later, so many people had joined the movement that the East German government was compelled to open their borders to the West."

The virtual museum exhibits are the capstone projects based on students' experiences in Germany and include in-depth examinations of topics covered in two advanced German courses at SFA.

"The exhibits take visitors to places of cultural and historical significance in 21st century Germany," Stoehr said. "Each exhibit is a website created by a small group of students and is designed to invite visitors to explore each topic in as much detail as they wish."

The websites include extensive illustration of the specific topics in the form of photos and video clips, as well as written narration that supports the visuals. The topics range from the lives of Afro-Germans in the Third Reich, to escape from East Germany, to the lives of youth in the GDR (East Germany), to personal accounts and contributions to what is known as the "Peaceful Revolution" in 1989.

Among the project participants are four creative writing students who will display poems they wrote that were inspired by the trip and topics the class studied during the spring semester.