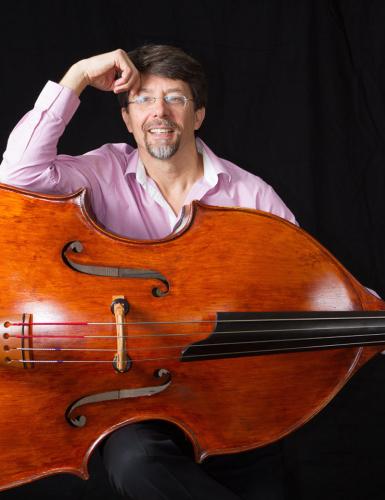 Jeff Bradetich will be on the Stephen F. Austin State University campus to present a guest recital at 6 p.m. Thursday, March 3, in Cole Concert Hall.


NACOGDOCHES, Texas - Jeff Bradetich, regarded as one of the leading performers and teachers of double bass in the United States, will present a guest recital at 6 p.m. Thursday, March 3, in Cole Concert Hall on the Stephen F. Austin State University campus.

Regents professor of double bass at the University of North Texas, Bradetich is an active lecturer and clinician. His concert is designed to "showcase the incredible sound and expressive palette of the bass as a solo instrument," according to Carlos Gaviria, SFA School of Music faculty member.

"The instrument featured in this concert was made in 1767 by the famous Italian maker Guadagnini and is one of the best instruments in the world," Bradetich said.

A highlight of the concert will be a performance of Sonata No. 2 for double bass and piano, originally for cello, by Ludwig von Beethoven.

"The 2nd Beethoven cello sonata was performed by the leading bass player of the day with Beethoven at the piano, and he gave his blessing to perform the work on bass," Bradetich said.

The other major work to be performed is Concierto para Contrabajo and Orquesta (concerto for double bass and orchestra) by Andrés Martin of Argentina.

"This is one of the finest new works for bass and captures the majestic spirit and vivid colors of the Hispanic culture," Bradetich said.

Gaviria will be featured in a duo for two basses and piano, "A Day of Change" by Doc Solomon, written in memory of the 9/11 attacks on New York City. "This is a very beautiful and heart-felt work," he said.

Proclaimed by the New York Times as "the master of his instrument," Bradetich has won many major solo competitions, recorded six solo albums of music for double bass and piano and has been featured on radio and television throughout North and South America and Europe including CBS, CNN, BBC and NPR.

"Mr. Bradetich has performed more than 600 concerts on five continents, and he is looking forward to sharing the beautiful sounds of the bass with the people of Nacogdoches," Gaviria said.

The recital is a joint presentation of the SFA College of Fine Arts and School of Music. Admission is free. For more information, call the SFA Fine Arts Box Office at (936) 468-6407 or visit www.finearts.sfasu.edu.