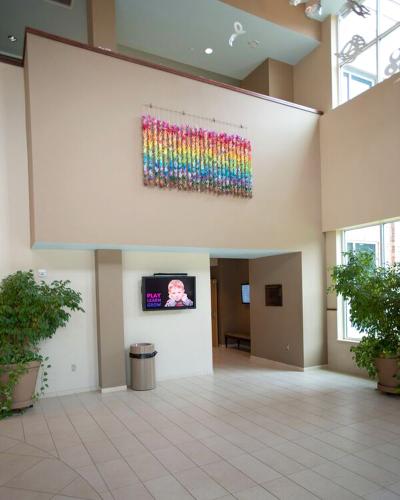 Students in School of Art Assistant Professor Bill Nieberding's art education courses for pre-service elementary teachers recently completed a project based on a multicultural curriculum developed at Princeton University. It began by inquiring about the background behind a paper crane donated to the World Trade Center Memorial Museum in New York City in 2009.

Using their smartphones in class, the students learned that the crane was donated by Masahiro Sasaki, whose sister, Sadako Sasaki, died of leukemia after exposure to radiation in the bombing of Nagasaki during World War II. Upon reading the book "Sadako" in class, students learned that she folded 1,000 paper cranes with the hopes that her wish to be healed would come true, an example of an old Japanese legend that if someone folds 1,000 cranes, their wish will be granted.

"As part of our process of coming to understand the meaning of the cranes, we started folding cranes with the intention of learning the process, each student folding a few," Nieberding explained. "However, when two of the students suggested that it would be good to exhibit the cranes on campus, it became apparent that we should complete what is called a Senbazuru, or a group of 1,000 origami cranes."

The students folded cranes and strung them into the traditional form of 25 strands of 40 cranes. While doing this, the students debated appropriate places to display the work, Nieberding said.

Several students suggested the ECRC, and when Nieberding reached out to Lysa Hagan, principal of the SFA Charter School, and Elizabeth Vaughan, professor of elementary education and chairman of the Department of Elementary Education, they were "extremely enthusiastic about the project," he said. "The students all agreed that it was a good idea to donate the artwork to the ECRC."

The process affected each student in a different way, Nieberding said.

"Making 1,000 paper cranes as a class was a really unique experience," said Sheridan Sharp, Lumberton sophomore. " It provided a way for all of the students from different walks of life to create a simple piece of art that would be united all together in a mass display as a symbol of unity and love."

"To me, the cranes symbolize peace and tranquility, aspects that we, as college students, are missing in our daily lives much of the time," Longview junior Erin Whittenberg said.