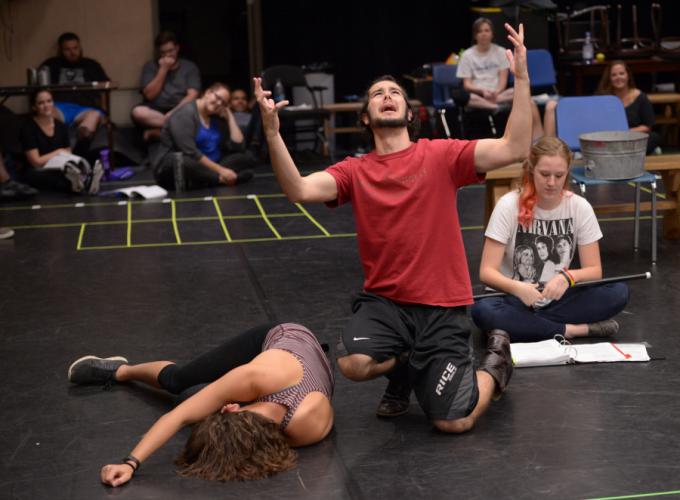 
NACOGDOCHES, Texas –Angela Bacarisse believes “it takes a village” to bring all the pieces of the production puzzle together to form a successful play.

“When you see how many people are involved, it becomes clear that we are a buzzing beehive of a small village,” she said.

That’s the situation underway as theatre students prepare to open the rock musical “Bloody Bloody Andrew Jackson,” Oct. 4 on the W.M. Turner Auditorium stage as the first Mainstage Series performance of the year. Along with Bacarisse as director and choreographer, Dr. Tod Fish, associate professor of choral activities for the SFA School of Music, is musical director, and Longview senior theatre major Tanner O’Neal is student assistant director.

“I often tell students that for every person on stage, there are between 10 and 15 people off stage making the show happen,” Bacarisse explained, “from playwright to publicity, costume and sound design to props and painting.”

With music and lyrics by Michael Friedman and a book by Alex Timbers, “Bloody Bloody Andrew Jackson” takes a comedic look at the founding of the Democratic Party and portrays Andrew Jackson, America’s seventh president, as an emo rock star. Emo is a style of punk rock music but with more complex arrangements and lyrics that deal with more emotional subjects. The process for this play began with research for both Bacarisse, as the director, and for Leander junior Kayla Peterson, dramaturg for the production.

“Dramaturg is really just a fancy word for research assistant,” Peterson said. “My main job is to study the historical and contextual background of the show and compile the information in a way that is comprehensive and straightforward for the cast. The ultimate end result is that the cast members have a greater understanding and appreciation for the characters they play, as well as the world in which those characters exist.”

The next step, according to Bacarisse, was to gather a design team and share ideas about the script. A number of student designers are working on the production, including Nacogdoches senior Cloey Hammonds, who is completing her second costume design for a Mainstage production. Kingwood senior Bruce Moran serves as sound designer.

"As a sound designer, it is my job to analyze the script and find the places where sound effects or music can be used to help shape the world of the show,” Moran said. “Designing sound is more than just making noise, though that is always the end result. On average, a good sound design requires weeks to come together, but the end result is a character that is heard but not seen."

All of the designers, faculty or student, rely on skilled technicians to get the job done, Bacrisse said. In particular, several students work as skilled theatrical electricians for the musical, including Hutto junior Brittany Tennis, who is the master electrician in charge of all lighting equipment, making sure that it is placed where the designer wants it and has proper electrical circuiting.

“I am also responsible for updating paperwork and supervising the student crew and making sure that they stay safe and are properly handling our equipment,” Tennis said.

With a large set, designed by theatre Professor Tara Houston, and lots of stairs to climb, cast members are in for an aerobic workout, Bacarisse said. As an ensemble piece, the musical has everyone, with the exception of the student cast as Andrew Jackson, playing multiple roles.

“Along with costume changes, there will be differences of character physicality and vocal work to consider,” she said. “Everyone is going to be stretched by this production.”

Pulling all these people and their contributions together is the vital job of the stage manager, Bacarisse explained, which for “Bloody Bloody Andrew Jackson” is Brownsboro senior William Odom, who is stage managing his fourth major production at SFA. He also oversaw the School of Theatre’s production that traveled to Edinburgh, Scotland in August 2015, and he was an assistant on a number of other productions, including the musical “Spamalot” in 2014.

“Stage managers have to be able to see the whole picture – what is needed and when,” Bacarisse said. “The stage manager is the ‘master mechanic’ that keeps the machine moving forward.”

Countless hours of rehearsals, building sets and costumes and providing the technical support for a production this size keep students busy for weeks prior to opening night.

“The hardest part about working in academic theatre is that once we get students trained, they graduate,” she said. “But what joy to know we are sending good artists out into the working world.

“There is no magic; it is sheer human labor,” Bacarisse said. “But if what the audience sees appears to be magic, then we have all done our jobs well.”

“Bloody Bloody Andrew Jackson” runs Oct. 4 through 8. The show is recommended for mature audiences. A content advisory may be viewed at www.theatre.sfasu.edu.