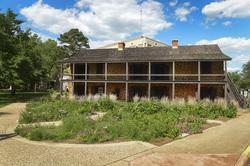 A celebration of the Stone Fort's 80th anniversary will begin at 6 p.m. Oct. 15 at the Stone Fort Museum on the Stephen F. Austin State University Campus.


NACOGDOCHES, Texas - Alongside Nacogdoches' celebration of its 300th anniversary and Stephen F. Austin State University's preparation for its 100th, the Stone Fort Museum on the SFA campus will honor 80 years of service to the university and community during a celebration slated for Oct. 15.

SFA Piney Woods Fiddlers will open the 80th celebration at 6 p.m. at the fort before City of Nacogdoches Mayor Roger Van Horn reads a proclamation regarding the fort's historical importance. The public is then invited to participate in come-and-go activities, including a Dutch oven-cooking demonstration by Nacogdoches Boy Scouts and a discussion of life as a Texian soldier by David Pistole, living history re-enactor.

"The museum is marking its anniversary with the launch of an institutional planning process that will align our programs more closely with the SFA Envisioned strategic plan," Spears said. "The planning committee, comprising SFA faculty and staff members, local heritage resource professionals and community members, is working to advance the mission of the museum as a learning laboratory for SFA students and a relevant resource for the community."

The exhibit "El Camino Real de los Tejas and Building Nacogdoches: 1716 - 2016" will be on display during the event and, Spears said, will correlate well with the celebration's overall spirit.

"The exhibit is an outgrowth of a decade-long project on the Camino Real, dating back to the 1998 award-winning exhibit, 'Traversing the Wilderness: El Camino Real in Eastern Texas,'" she added. "A series of workshops from 2008 through 2012 introduced educators to the national historic trail, and in 2015, the museum completed the initial installation of a Spanish Colonial demonstration garden that interprets native and introduced plants along the trail. The current exhibit focuses on the trail along which the Spanish traveled on their way to eastern Texas, the people and places along the trail and their impact on the development of Nacogdoches."

A John Wayne film, "The Big Trail," will be shown on the Stone Fort's north lawn beginning at 7:30 p.m. with a brief introduction by Jeff Williams, an expert of the Camino Real trail, who will discuss the difference between trail travel fiction and reality. Patrons are encouraged to bring lawn chairs.