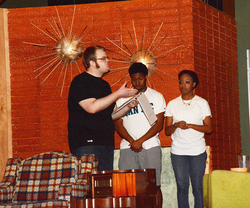 SFA theatre student Robert Malbrough, left, standing in as the character of Karl Linder, rehearses with fellow actors Terrance Simon and Jonee Lewis in a scene from "Clybourne Park." The School of Theatre will present the Bruce Norris play at 7:30 p.m. Tuesday through Saturday, Feb. 23 through 27, in W.M. Turner Auditorium on the SFA campus. Photo courtesy of The Pine Log.

NACOGDOCHES, Texas - In spite of the best and most sincere efforts of many Americans, the state of race relations in the U.S. today needs great improvement. The negative effects of urban poverty, particularly on the African American population, continue to plague the nation.

Those observations by Dr. Dianne E. Dentice, associate professor of anthropology, geography and sociology at Stephen F. Austin State University, show us that the racial themes addressed in the upcoming SFA School of Theatre's production of "Clybourne Park," despite improvements, are as timely today as they were at the height of the Civil Rights movement.

"The overall state of race relations in the U.S. is slowly improving, but we still have a long way to go," Dentice said. "Poverty, urban decay, job and wage stagnation, and education inequality continue to have devastating consequences for young African Americans, especially males."

The School of Theatre will present "Clybourne Park" by Bruce Norris at 7:30 p.m. Tuesday through Saturday, Feb. 23 through 27, in W.M. Turner Auditorium on the SFA campus.

Winner of the 2011 Pulitzer Prize for drama, "Clybourne Park" was written in response to the classic "A Raisin In the Sun." In "Raisin," an African American family in 1959 Chicago is moving to a white neighborhood, Clybourne Park. The first act of the newer play is set on the same day as one scene in "Raisin," in the house that the family is buying. The second act is set in the same house 50 years later, with the tables turned - a white family now seeks to buy the house from a black family.

One of the main issues in "Clybourne Park" is the effect that an influx of new residents from a different racial group has on a community and, in particular, on its economics. The play highlights the concern a white homeowner (Mr. Linder) has in 1959 that new African American homeowners will lower his property value and the fears of the African American residents 50 years later who are concerned about an influx of white families and the resulting gentrification.

"Unfortunately (in my opinion), Mr. Lindner's concerns/opinions about neighborhood integration have not gone away," Dentice said. "Even though things have gotten somewhat better over the last 50 years, surveys of the American public reveal that African Americans, Native Americans, Hispanic Americans, and gay men are seen as less competent than their white counterparts. One fact cannot be disputed, and that is that African Americans are still the most segregated minority group in the United States.

"Gentrification continues to be a reality - especially in urban areas like Philadelphia," she said. "It does not always affect only African Americans, however. In cities like San Francisco, middle class white professionals are being displaced by newly minted high tech millionaires. The reality of the situation is that progress is not going to be halted by cities that are struggling to meet their budgets. Poor and working families will continue to be locked out of housing opportunities because they just cannot afford the increased rent that comes with structural improvements initiated by new owners."

"The conflicts are all too real," Simon said. "I personally live in a neighborhood that is being gentrified, and I have seen childhood friends have to move out of their homes."

Another theme in the play addresses "racial anxiety," or the way the characters communicate sensitively yet directly about race, culture and gentrification. Dentice said many of her students are not fully aware of the history of the civil rights movement and the struggle people went through during those years.

"Even though the content of my classes is often uncomfortable for students of all races and ethnicities, they have to become aware that prejudice, stereotyping and discriminatory practices are still a reality in our society and others," she said. "It is my responsibility, however, to present the material and discuss how things have changed but still remain the same with regard to racial profiling and mass incarceration of African Americans.

"I think that Americans would like to believe that racial strife is a thing of the past," Dentice continued. "Some Americans think that there is nothing else to be done and our society is post-racial. A really inconvenient fact is that our country has the highest prison population rates in the world. The majority of prisoners are poor males, many of whom are black."

"It is a costly system that is largely ineffective with high recidivism rates across the board," she said. "Until we begin to deal with all the variables that cause crime - poverty, decaying inner city schools, high dropout rates and lack of opportunity for minority youth - we will continue to have racial disparities in the criminal justice system that are largely an American phenomenon."

Simon believes that the play demonstrates "the need for Americans, who live in possibly the most privileged country in the world, to sit down and have true heart-to-heart conversations and stop shunning the subject."

"With that being said, Bruce Norris has written some brilliant dialogue in this dark comedy," Simon said. "There is nothing better than going to the theater and getting your own interpretation, and I hope people leave wanting to speak more intellectually on the subject."

"I think one of the lessons you can take from this play is how to consider social issues from all sides," said fellow actor Jonee Lewis of Allen, "and how to go about it in a way where you raise awareness and are heard without spewing ignorance. As far as the race discussion, I believe that we have made some progress. I also think that the discussion of race relations will always be uncomfortable, but not impossible."

Can heightened discussion about race, or even movies or plays like "Clybourne Park," help to improve race relations?

"I think that the arts can provide positive avenues for open debates about race and other social issues, such as mass incarceration and poverty," Dentice said. "Plays like 'A Raisin in the Sun' and 'Clybourne Park' represent different perspectives that were overlooked for many years prior to the Civil Rights movement. Writers like James Baldwin, Lorraine Hansberry and Toni Morrison, among others, not only gave us great literature and play writing, but they also made us think about who we are as a country and what is important to move us forward. They are some of the giants - in my opinion.

"The challenge for our contemporary society is to continue elevating the discussion surrounding race relations in post-Obama America and be really careful not to fall victim to cliché and innuendo."

Audiences of "Clybourne Park" will not only learn more about race relations, but they will also see examples of "why we as Americans have failed at this subject," Simon said.

"I believe that Bruce Norris couldn't have written more realistic people," he said. "Every single character in this show fails to achieve their goal, and I believe this happens because we all have our minds set on what we believe, and no one wants to actually sit down and listen to what the other is saying."

Zach Hanks, assistant professor of theatre at SFA and the play's director, agrees with the premise that plays like "Clybourne Park" are important to perform to keep the discussion on race relations moving forward.

"Pointing out a flaw in another person's thinking is usually far less persuasive than showing it to them," Hanks said. "This is why plays like 'Clybourne Park' aren't just important, but are profoundly necessary."

"Hard data, incontrovertible facts and ironclad arguments not only fail to change people's minds, they often make those people dig in and double down on the positions they already hold," Hanks said. "However, show an audience an injustice, make them sit helplessly and bear witness to the pain it causes human beings, and you can effortlessly make people change their minds and clamor to change their world, because you did it by way of their hearts."

Single tickets are $15 for adults, $10 for seniors and $7.50 for students/youth. For tickets or more information, call the SFA Fine Arts Box Office at (936) 468-6407 or visit http://www.finearts.sfasu.edu/. Tipton-Ford-Lincoln is an annual sponsor of the School of Theatre's Mainstage Series.