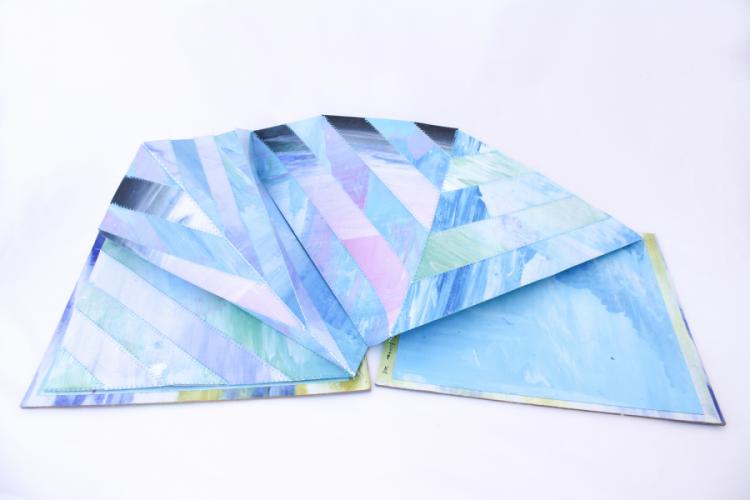 Artist Kelie Bowman’s “Where it Begins to Fade, 2015” is among the works in the exhibition “Artist Books from the Booklyn Gallery: High Performance Printmaking” showing Oct. 27 through Jan. 14 in The Cole Art Center @ The Old Opera House.


NACOGDOCHES, Texas – The Stephen F. Austin State University School of Art will host two exhibitions – a showcase of alumni art work and an exhibition of artist books from the Booklyn Gallery – Oct. 27 through Jan. 14 in The Cole Art Center @ The Old Opera House in downtown Nacogdoches.

A reception for the double opening with artists in attendance is scheduled from 6 to 8 p.m. Saturday, Oct. 29, at Cole Art Center. The exhibitions are a presentation of the Stephen F. Austin State University College of Fine arts and School of Art.

The mixed media “SFA Alumni Showcase” will be the first of its kind in several decades and will feature a variety of paintings, sculpture and other work, according to Gary Parker, retired SFA School of Art instructor and the curator of the show.

“I left it up to the individual artist to curate their own section,” Parker said. “I gave each artist a certain amount of wall space and all the floor space they wanted, but most will be traditional work.”

Parker has been an advocate of an alumni exhibition for many years. After his retirement, Parker was asked by the School of Art to turn his idea into a show that he would curate.

“I’m glad we’re doing this, and I hope it becomes a biennial event,” Parker said. “I think there are enough SFA art alums out there who are doing good things that we could feature them in this way for years to come.

“I want current students to be aware that there is a future for them in art, if they go get it,” he said. “They need to understand there is life after graduation, and that they can pursue an art career and be successful at it. If you have examples in front of you from previous students who have succeeded, it’s encouraging.”

Keeping up with alumni across the country who have had thriving art careers is important for not only recruiting purposes, but also for documenting SFA’s history of generating successful artists, Parker said.

“That’s what current students need to see,” he said. “Not only does this give validity to SFA itself, but it gives students a certain amount of hope for the future.”

“Artist Books from the Booklyn Gallery: High Performance Printmaking,” the second exhibition, addresses the evolution of printmaking in the 21st century. The exhibition proposes that printmaking in the 21st century “will thrive as a social practice moving beyond the pop, decorative and empty abstraction that defines the commodity-driven ‘fine’ print world, and continuing to further the goals of socially engaged and experimental printmakers ranging from Goya to Judy Watson and beyond,” states Marshall Weber, curator of the exhibition.

“I propose that there is room for an urgent, attentive, attached, and ‘awoke’ printmaking practice,” Weber said, “… a practice that engages with the world both passionately and compassionately and has commitments to aesthetic integrity and social and ecological justice. In these artists’ work, aspects of public and private performance, of choreography and gesture, are a crucial conceptual and/or material part of the printmaking process.”

Exhibitions are sponsored in part by the SFA Friends of the Visual Arts and Nacogdoches Junior Forum. Admission is free.