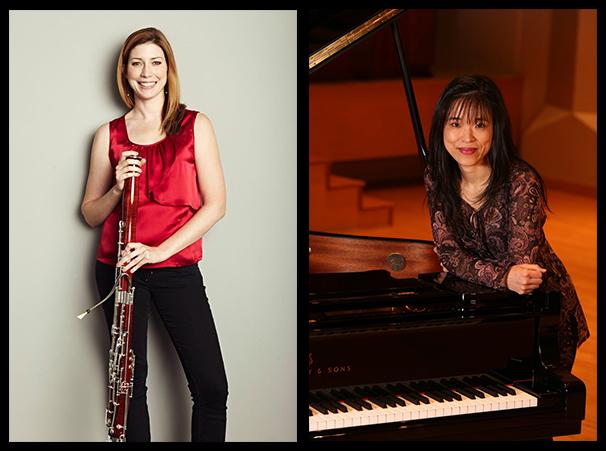 The program will feature all modern repertoire for bassoon and piano, written in the 20th and 21st centuries by French and American composers. Shoemaker and Ayer recorded the music for a CD that will be released in 2017. Among the highlights is Joseph Schwantner’s “Black Anemones,” which was originally written for soprano and piano and adapted for flute and piano at the request of flute artist Ransom Wilson, Shoemaker explained.

“I fell in love with the piece and decided to play it on the bassoon,” she said. “I think it works beautifully!”

The most technically challenging piece on the program, and relatively unknown in the bassoon community, “Variations Concertantes” by Ida Gotkovsky, explores different characters in each variation and is not a typical “theme and variations,” Shoemaker said.

“It asks the bassoon to play in the extremes – high and low, soft and loud, lyrical and aggressive,” she said. “It is very difficult but very satisfying to perform.”

The program also includes Etude No. 5: Variations on “Streets of Laredo” by John Steinmetz. The short piece for unaccompanied bassoon is based on the popular tune “Streets of Laredo,” but the variations are neo-Baroque in style, Shoemaker said.

Shoemaker is known for her varied career as a soloist, chamber musician, orchestral player and educator. She currently serves as assistant professor of bassoon at Baylor University and is principal bassoonist with the Shreveport and Waco symphony orchestras. She’s performed with the Fort Worth Symphony Orchestra and other orchestras across the South. She is a founding member of the Relevents Wind Quintet and has toured with the ensemble throughout the U.S. and Germany.

Hosoda-Ayer is assistant professor of piano at Baylor University. She has concertized throughout the United States, Canada, Japan and Korea, where she is in demand both as a soloist and collaborative pianist. With her husband, SFA clarinetist Christopher Ayer, she performs as the Duo Karudan throughout the U.S., Canada and Japan and has performed at the International Clarinet Association World Conferences in Tokyo, Austin and Atlanta.

The performance is a feature of the Cole Performing Arts Series. Tickets are $8 for adults, $6 for seniors and $3 for students and youth. For tickets or more information, call the SFA Fine Arts Box Office at (936) 468-6407 or visit www.finearts.sfasu.edu.