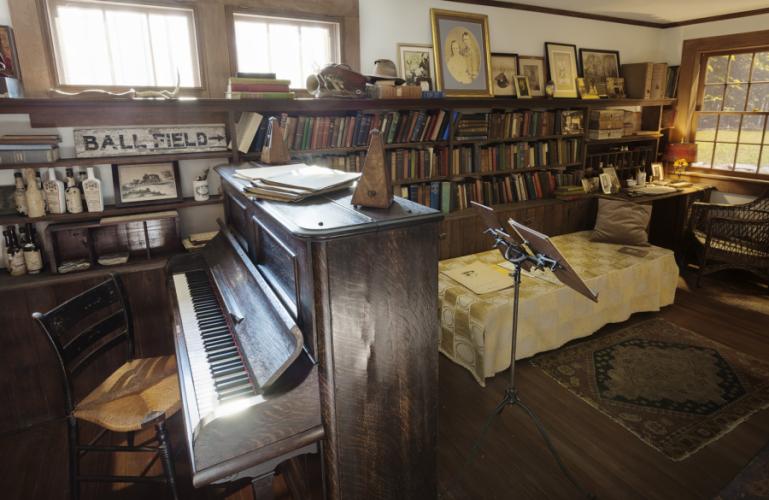 This is a view of American composer Charles Ives’ studio. “Captured Memories: The Songs of Charles Ives” will be presented at 7:30 p.m. Monday, Oct. 17, in Cole Concert Hall on the SFA campus as part of the School of Music’s Cole Performing Arts Series.


NACOGDOCHES, Texas – The Stephen F. State University College of Fine Arts and School of Music will present “Captured Memories: The Songs of Charles Ives” at 7:30 p.m. Monday, Oct. 17, in Cole Concert Hall on the SFA campus.

“American composer Charles Ives wrote music for a wide variety of musical genres, including songs for voice and piano,” said Petti, director of accompanying at SFA. “Of his approximate 150 songs, a common thread in the text is an idea of a memory, either past or present. A musical picture is created.”

Milius, an SFA alumna and current adjunct music faculty member, will provide a short history of the composer and his song output to begin the concert.

“No Charles Ives song concert would be complete without a performance of the well-known cowboy song ‘Charlie Rutlage,’ so, naturally we will include it on this program,” Petti said. “Ives’ compositional range is enormous. There will be moments of musical tenderness, comedy, anger, romanticism and a touch of downright ugly dissonance. What is certain is that by the end of the concert you will be tapping your foot to the music while laughing merrily in your seat.”

The concert is part of the Cole Performing Arts Series. Tickets are $8 for adults, $6 for seniors and $3 for students and youth. For tickets or more information, call the SFA Fine Arts Box Office at (936) 468-6407 or visit http://www.finearts.sfasu.edu/.