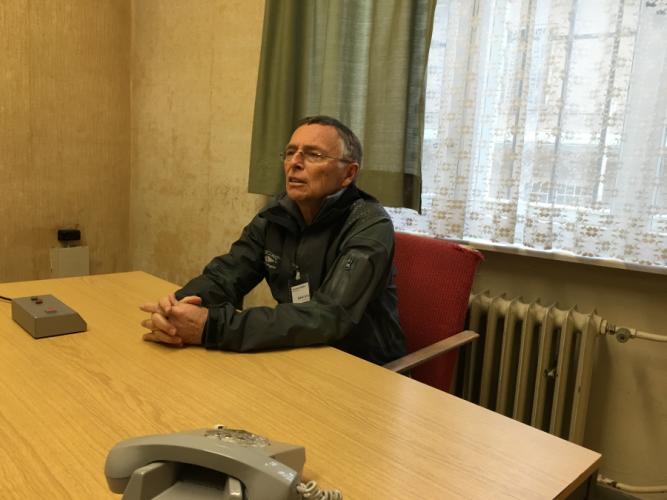 His presentation is sponsored and organized by the SFA Department of Languages, Cultures and Communication. It is free and open to the SFA and Nacogdoches communities.

“I met Mr. Scheidler in May 2014 at the memorial site of the former East German state secret police prison, Hohenschönhausen,” said Dr. Louise Stoehr, SFA associate professor of German and the director of the Language Resource Center. “He was the contemporary witness who met with my study abroad students, introduced them to the history of the Hohenschönhausen prison and took us on a tour that traced the stages of his personal experience being a political prisoner at that site.”

Scheidler was born in 1943 in Wollhaus, now a part of Poland. In 1968, just before he was expected to begin doctoral studies in physics, he and his friends distributed 800 leaflets protesting the Soviet intervention during the Prague Spring.

He was arrested by the Ministry of State Security of the German Democratic Republic and sentenced to two years and six months in prison, which he spent at the labor camp in Berlin-Hohenschönhausen.

“In his presentation, Mr. Scheidler will address the importance of free speech for an open, democratic society and share his personal experience of attempting to exercise free speech in a dictatorship and the consequences of that attempt,” Stoehr said. “I am hoping that participants will realize the importance of constructive, free speech and a free press for maintaining a functioning democracy. Similarly, I would hope that participants will think about the implications of Mr. Scheidler’s experiences for our society today.”

Following his early release in December 1969, Scheidler worked as a technician and was barred from pursuing his academic career as a physicist.

“I am excited that more of the SFA community, especially those who do not have the opportunity to travel to Berlin and meet with Mr. Scheidler, will have the opportunity to learn firsthand from a contemporary witness to life in a dictatorship and the contrast of his life then to the life he leads now in (re)unified Germany,” Stoehr said.

As a contemporary witness to East German political history, Scheidler has worked as a tour guide at the Berlin-Hohenschönhausen Memorial since 2009.