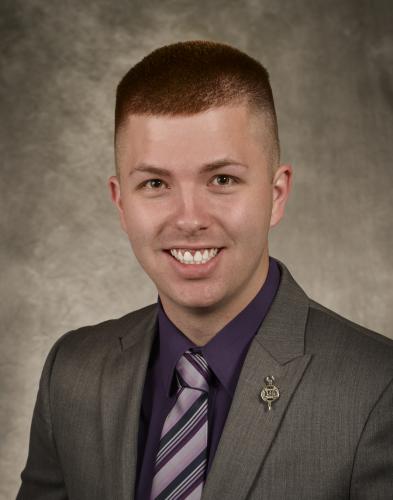 
NACOGDOCHES, Texas - Chad Huckaby of Martinsville has been appointed by Gov. Greg Abbott to serve as student regent on Stephen F. Austin State University's Board of Regents during the 2016-17 academic year.

Huckaby serves on the student advisory board of Omicron Delta Kappa, a national leadership honor society, and he will join ODK's national advisory council later this summer. He also works as a graduate teaching assistant in the Department of Mathematics and Statistics in SFA's College of Sciences and Mathematics.

"I am humbled to be selected to serve as student regent," Huckaby said. "It means a lot to me, and it speaks to the university's ability to develop student leaders that a person from a small town like Martinsville can be chosen as one of only a few student regents in Texas to serve in this capacity."

A third-generation Lumberjack, Huckaby said he plans to graduate with his master's degree in May 2017 and pursue a career in public service.

"My tenure at SFA has fundamentally changed who I am as a leader," he said. "It has strengthened my work ethic, and I bleed purple."

Huckaby's first official duty will be attending the quarterly meeting of the SFA Board of Regents July 25-26.