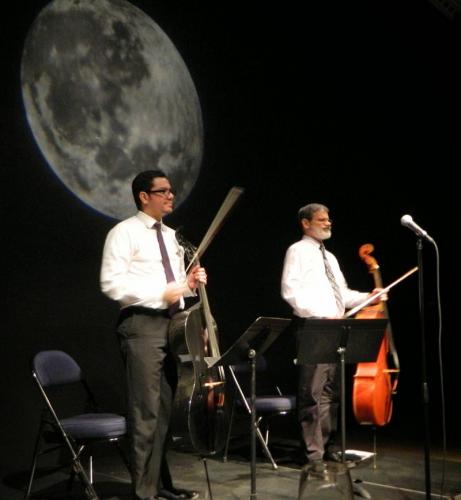 Selections will be drawn from the artists’ two recordings of Offenbach cello duos, as well as an ensemble piece for multiple cellos, featuring the SFA cello studio under the direction of Dr. Evgeni Raychev, cello instructor in the SFA School of Music.

Commonly known as the creator of French operetta, as exemplified by the famous Can-can from “Orpheus in the Underworld,” Offenbach was actually German, not French. He entered the Paris Conservatory at the age of 16 as a cellist, followed by his tenure as a member of the Opéra-Comique cello section.

Since 2005, Christopher has been performing and preserving this repertoire, often in world premiere recordings, on the Human Metronome label. With cellist Ruth Drummond, he recorded five CDs. With his current duo partner, Paz, a sixth CD, “The Gift-Wrapping,” Opus 54, Nos. 1-3, was released in May 2016. Their second CD, the seventh in the series, will be released later this year and will feature the world premiere recordings of the “École du Violoncelle,” Opus 19 and 20.

Christopher has appeared as clinician and guest artist throughout the United States, Costa Rica, Honduras, Panamá and South Korea. He has performed with Shreveport Symphony Orchestra and Shreveport Opera. He is a former lecturer in the SFA School of Music. As a member of the Nashville String Machine, Christopher has recorded with artists such as Faith Hill, Ricky Skaggs, Bruce Springsteen and George Strait. He is associate professor of cello and music theory at Northwestern State University in Natchitoches.

Paz has worked with the chamber string orchestra in San Pedro Sula and the Sinfónica Centroamericana. A former student of Christopher, he graduated in May 2014 with a Bachelor of Music Performance and in May 2016 with a Master of Music Performance from Northwestern State University. Paz currently performs with symphony orchestras in the Ark-La-Tex area and works in the Natchitoches School Board String Program.

The Cello Club, a cello ensemble performance endeavor founded by Raychev that strives to bring cellists together, is concert sponsor.