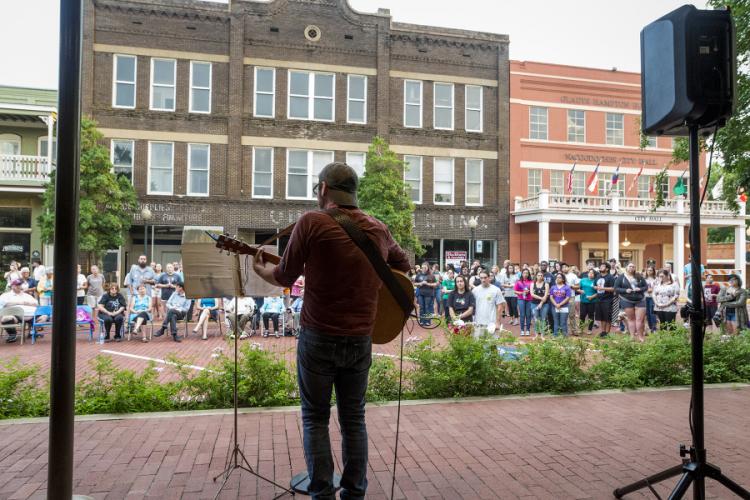 Music therapist Grant Howarth plays to hundreds of Stephen F. Austin State University students and Nacogdoches community members gathered on the south side of the Nacogdoches downtown square Monday night as part of a candlelight vigil organized by two SFA organizations in remembrance of the 49 people who died in a recent shooting at an Orlando, Florida, nightclub.


NACOGDOCHES, Texas - Crowds filled the south side of the Nacogdoches downtown square Monday night for an event organized by members of the Stephen F. Austin State University chapter of Psi Chi, an international psychology honor society, and Pride Nac, the LGBT organization at SFA, in remembrance of the 49 people killed in the recent shooting at an Orlando, Florida, nightclub.

"The mood was somber and reflective with a focus on coming together as a community in solidarity with Orlando," said Dr. Lauren Brewer, SFA assistant professor of psychology. "The event was a huge success in that the community of Nacogdoches rallied around the Orlando community from almost 1,000 miles away."

Kris Nichols, Psi Chi president, served as the event's emcee and was co-organizer of the vigil along with Libby Peavy, co-president of Pride Nac.

"I think the vigil definitely accomplished the goal we had in mind to" stand in support of Orlando victims and their families, said Logan Watson, Pride Nac member and SFA mass communication senior. "I was a little worried I would be very somber and sad standing there, but it felt more positive, feeling a sense of community and letting people know people care about the LGBTQ+ community, the victims and their families. There are people here that care about the tragedy and want to come together in support."

"Grant Howarth, a local music therapist and musician, played several songs, including one he wrote," Brewer said. "The Rev. Kyle Childress, pastor of Austin Heights Baptist Church, offered a few words followed by an opening prayer. Carolyne Moore from the Nacogdoches Quilters Guild presented a quilt her team made. Each attendee was asked to tie a knot, finishing the quilt. While tying a knot, each attendee was asked to say a prayer or blessing.

"Stephen Wright, a teacher at McMichael Middle School, spoke about the importance of taking action to promote love, and Holli Harrison, Pride Nac co-president, offered a message of love and support to those in the LGBT community."

Though a windy night, attendees lit candles toward the end of the event as members of the SFA Greek Multicultural Club read each of the 49 victims' names aloud. Both the quilt and donations collected throughout the evening will be donated to families of the victims.