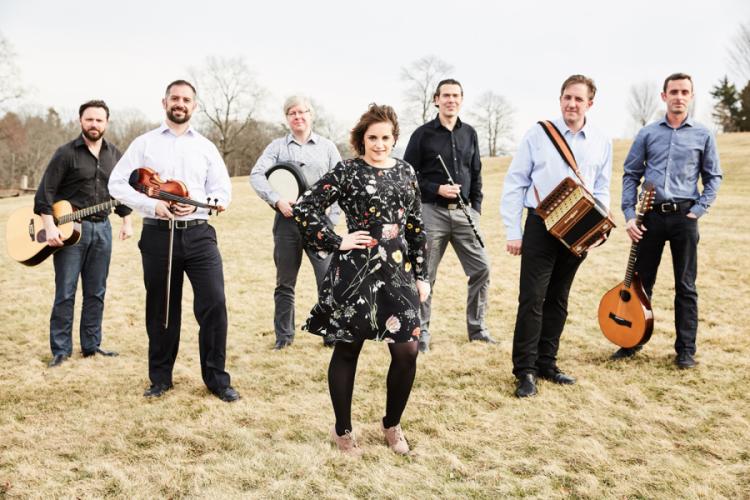 Celtic music lovers will not want to miss a performance of acclaimed Irish band Danú at 7:30 p.m. Friday, Dec. 16, in W.M. Turner Auditorium on the SFA campus. Danu´ celebrates Christmas at SFA with “Fe´ile Na Nollag” (A Christmas Gathering) as a feature of the College of Fine Arts’ University Series. Photo credit: Kelly Davidson


NACOGDOCHES, Texas – Celtic music all the way from Ireland will signal the opening of the Christmas holiday at Stephen F. Austin State University when the College of Fine Arts presents a special performance of the internationally acclaimed professional ensemble Danú at 7:30 p.m. Friday, Dec. 16, in W.M. Turner Auditorium on the SFA campus as part of its 2016-17 University Series.

Danu´ will celebrate the festive season at SFA with “Fe´ile Na Nollag” (A Christmas Gathering). Celtic music lovers around the globe have been thrilled by Danu´’s virtuoso players on fiddle, flutes, button accordion and percussion as well as the gorgeous voice of Nell Ni´ Chro´ini´n, performing along with top-notch guest dancers, according to Scott Shattuck, associate dean for the College of Fine Arts and the director of the University Series.

“This concert will be a yuletide treat for the entire family,” Shattuck said. “Tickets to this event would make a unique and welcome gift for anyone.”

Hailing from historic County Waterford, Danú is one of today’s leading traditional Irish ensembles. Their standing-room-only concerts throughout Ireland are spectacular events, featuring high-energy performances and a glorious mix of ancient Irish music and new songs, according to Shattuck.

“Danú takes its audiences on a musical journey to their native Ireland, offering a thrilling and memorable concert experience,” Shattuck said.

Among the selections to be performed during this concert is the Irish version of “Silent Night,” known in Irish Gaelic as “Oíche Chiúin.”

“‘Silent Night’ is a song that is known the world over,” Shattuck said. “Danu´ will perform it in the Irish language followed by the English version with the audience invited to join in and sing along.”

Winners of numerous awards from the BBC and Irish Music Magazine, Danú has toured throughout much of the world with stops at The Hollywood Bowl in Los Angeles, Symphony Space in New York City, and major concert venues in the United Kingdom, India, Israel and across Europe. To learn more about Danu´, visit www.danu.net.

This performance is sponsored in part by NMC Health Network (Nacogdoches Medical Center).

Prior to the performance, Dr. Rick Jones, professor of theatre and interim director of the SFA School of Theatre, will present an informative talk about Irish culture at 7 p.m. in Griffith Gallery. The gallery is located across the hall from Turner Auditorium, which is located in the Griffith Fine Arts Building, 2222 Alumni Drive. The audience is invited back to the gallery for a post-performance reception to meet the performers and to honor the event’s corporate sponsor.