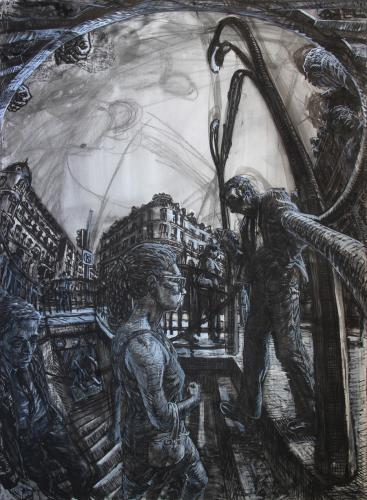 "Metro Travelers," charcoal, ink, and gesso on paper, 70x51" 2015, is among the works included in the exhibition "Christopher Troutman: Drawing and Narrative," which runs Aug. 31 through Oct. 14 in Griffith Gallery on the SFA campus.


NACOGDOCHES, Texas - The Stephen F. Austin State University School of Art will present as its first exhibition of the 2016-17 academic year, "Christopher Troutman: Drawing and Narrative," which runs Aug. 31 through Oct. 14 in Griffith Gallery in the Griffith Fine Arts Building on the SFA campus.

Troutman's beautifully rendered drawings portray scenes from urban daily life, defining the form and space of figures within their environments, according to John Handley, director of galleries at SFA.

"His work touches on the idea of illustration," Handley said. "In the artist's own words, they 'examine storytelling inspired by personal narrative.' His images are complex in their narrative and visual representation as well as in their use of unusual perspective."

Handley describes Troutman as "a master draftsman, able to create visually compelling imagery that touches on the real and the imaginary."

"Having a command of drawing is a foundation of great art, even if the artist abandons it for abstraction," he said.

Born in Kansas City, Missouri, and raised in Peoria, Illinois, Troutman has lived since 2013 in Beaumont, where he teaches all levels of drawing at Lamar University. In his work, Troutman uses drawing to define the form and space of figures and environments, as well as examine storytelling inspired by personal narrative.

He earned a B.F.A. from Bradley University in Peoria. After later moving to Japan, he and his wife opened a conversational English School in Kagoshima City. While living in southern Japan, he was the first foreign resident of Kagoshima to be awarded the Grand Prize at the 52nd Kagoshima Prefectural Art Exhibition in 2005. After completing an M.F.A. in drawing and painting at California State University, Long Beach, Troutman taught in at Eastern Kentucky University, Vincennes University and Eastern Illinois University.

He has had solo exhibitions in Japan and at several locations throughout the U.S. Troutman's work has appeared in numerous drawing publications and in juried drawing exhibitions. He was recently awarded the Grand Prize (Paris Prize) at the 66th Miyanichi Sougou Art Exhibition in Miyazaki Prefecture, Japan. He and his family return to Japan annually.

Admission to the exhibition, which is sponsored in part by the Friends of the Visual Arts and Nacogdoches Junior Forum, is free. A reception with the artist will be from 5 to 6:30 p.m. Thursday, Sept. 29, in Griffith Gallery.