Story by Kasi Dickerson and photography by Hardy Meredith
•
January 8, 2016 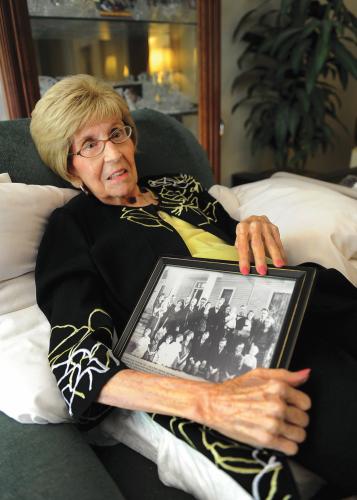 Arnodean "Deana" Bolton Covin resides in Kilgore, and at the age of 93, she fondly recalls her time as a student on SFA's campus. Until 2009, she made it her mission to annually attend the university's Homecoming.


Holding the vintage whistle to her lips, she blows it with gusto as if revisiting the days when she dressed in her drum major uniform and directed the 1939-40 Lumberjack Band on SFA's Birdwell Field.

A born leader and performer, Arnodean "Deana" Bolton Covin's '72 drive for perfection pushed her to excel in everything she attempted.

"As a child, she entered a singing contest and won second place. That wasn't good enough," Covin's daughter, Jadean Roberts, said. "She wanted to do something she could be the best at, so she taught herself to twirl a baton."

Covin's dedication to twirling did not waver as she grew. Roberts said as a teenager, her mom's cousin would try to get Covin to engage in social activities, but Covin refused. "Mom would say, 'No, I have to practice twirling,'" Roberts said.

Covin (née Selden), who was the first drum major for Henderson High School, was not only talented on the field but also in the classroom. When she graduated, she held the honor of being the female with the highest GPA.

After her high school graduation, Covin was highly recruited by colleges and received multiple scholarship offers. J.T. Cox, SFA's band director at the time, convinced Covin to enroll at SFA and become its drum major, a position she held until her senior year.

"Mr. Cox was very persuasive," Covin recalled. "I was offered the same scholarship at Southern Methodist University and Texas Christian University, but I chose SFA and couldn't have been happier with my decision."

While living on campus, Gibbs Hall became Covin's home. She involved herself in multiple campus organizations and social clubs. As a freshman, Covin was a Gibbs Hall council member, a Woman's Council member and member of the Pine Burr social club.

In addition, Covin was selected freshman class favorite. As one of the most popular students on campus, Covin's peers described her as talented and a good sport.

During her sophomore year, Covin remained a Pine Burr, a Woman's Council member and drum major. She was named to Who's Who Among Colleges and Universities for three years, and she also was elected class secretary and treasurer. During her junior year, she became a member of the Alpha Chi national honor society.

It is evident to anyone looking through Stone Fort yearbooks that Covin was recognized on campus because of her "expert handling of the band" and "wonderful personality and friendly spirit."

"I performed all my life," Covin said. "I loved the SFA uniform. It was the last uniform I wore."

She earned the reputation of an all-around popular girl and a leader in everything she undertook. In fact, she received distinction for winning the National Baton Twirling championship twice.

SFA is a university renowned for its traditions. Covin is connected to one tradition that began during her tenure-she was named the first Miss SFA in 1940.

Back then, each freshman, sophomore, junior and senior class nominated four women and four men to run for the title. The student body later voted for its favorites. Covin won the title three years in a row: 1940, 1941 and 1942.

"I think after the third time I won they decided Miss SFA should be a senior," Covin said as she laughed.

Each year, the SFA Alumni Association still presents the Mr. and Miss SFA awards to an exemplary male and female student who well represents and promotes the university. The Miss SFA award is officially named the Arnodean Covin Miss SFA Award in her honor.

Covin returned to SFA in the late '60s to finish her Bachelor of Science in kinesiology. By 1972, she had graduated SFA with her undergraduate degree and her Master of Education. She married J.W. "Cotton" Bolton, also an SFA graduate and former Kilgore College coach, who died in 1976.

She married the late Dr. Larry Covin in 1991. Larry was Cotton's SFA roommate and later an SFA professor. Deana and Larry also shared another connection: Larry was named Mr. SFA in 1942 alongside Deana. Both Cotton and Larry were SFA athletes and co-captains of the football team.

Her legacy at Kilgore College began in 1966 when she became the cheerleader sponsor and part-time instructor teaching golf and bowling. By 1967, Covin taught physical education full time at Kilgore College. She served under the world-famous Kilgore Rangerettes' founder Gussie Nell Davis as assistant director of the Rangerettes for seven years before becoming their second director in 1979. Current Rangerette Director Dana Blair can attest to Covin's leadership and talents. Blair worked alongside Covin as assistant director and choreographer.

"Mrs. Covin directed the team for 14 years and took over for Gussie Nell Davis, who had been the originator and the only director for 39 years. These were very big shoes to fill," Blair said. "Mrs. Covin brought the Rangerettes to new heights of perfection and performance."

Blair said Covin pushed the Rangerettes to not only do their best, but to be the best.

"Mrs. Covin also is a perfectionist through and through. She believes in practicing every detail and then practicing more," Blair said. "She has an unbelievable work ethic and was always willing to give 150 percent."

While with the Rangerettes, Covin met four U.S. presidents and traveled the world. She retired in 1993, but she continues to be influential to the Rangerette culture. The gym where the Rangerettes practice was renamed the Deana Bolton Covin Rangerette Gymnasium and dedicated in her honor in September 2001.

"The gym is where Miss Davis created the art form known as dance drill team. The Rangerettes have only practiced here in their 75-year history," Blair said. "It is the 'Rangerette' gym, and it is named after Mrs. Covin because of her many contributions to the organization."

Whether Covin was leading the Henderson band, directing the SFA band or instructing the Rangerettes, she carried herself with an unmatched level of perfection and passion.

Today, Covin still resides in Kilgore, and at the age of 93, she fondly recalls her time as a student on SFA's campus. Until 2009, she made it her mission to annually attend the university's Homecoming.

While trips to visit the campus are now difficult for Covin, she is surrounded by mementos from her days as drum major at SFA, the trio of Miss SFA honors she received and the legacy she's left behind as a former director of the world's most-famous drill team.

"Mrs. Covin was an amazing director who touched many lives," Blair said. "She will forever be a part of Rangerette history. Her favorite saying was, 'Just one more time.' She always wanted the Rangerettes to practice until they were perfect. She is a legend and an amazing woman."