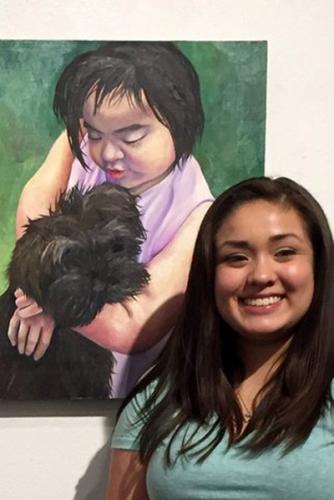 Plano junior Jacqueline Morales is this year's recipient of the Gary Q. Frields Art Scholarship awarded by the SFA Friends of the Visual Arts.

"I hope this scholarship allows students not to just become more informed but transformed into authentically original, creative, open-minded, charitable individuals who will give back to the community and inspire others in our field of study," Frields said in 2013 when the scholarship was established.

Shaun Roberts, assistant professor of painting at SFA, nominated Morales for the award.

"Jacqueline has been my student for several semesters now, and she consistently shows characteristics that I feel qualifies her to be worthy of the Gary Q. Frields Scholarship," Roberts wrote in his nomination letter.

"Jacqueline shows a wide range of understanding of the principles of art and isn't afraid to experiment in multiple mediums, whether it be painting or digital," he continued. "She understands that making quality artwork requires diligence and hard work. I often see her in the studios working outside of class time, which is a rarity among most students these days."

Roberts described Morales as "intelligent, well-liked and respected by her peers, and an example for our students to emulate." She is also involved in the SFA Art Alliance, the School of Art's student organization.

The FVA has established scholarships in the name of retiring SFA art professors who were employed in the School of Art for minimum of 10 years before retirement and who contributed in a significant way to the mission of the Friends of the Visual Arts board and its fundraising activities, such as consistently donating art for fundraisers, by providing monetary assistance, or by serving on FVA committees or board.

The SFA Friends of the Visual Arts is made up of community members who support the arts in East Texas and provide monetary assistance to students enrolling in the School of Art by conducting fundraisers, such as the upcoming annual 12X12 event in July.