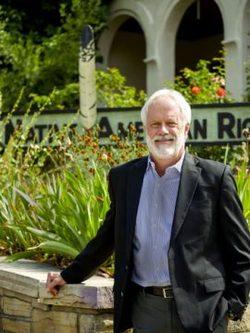 Steven Moore, an attorney for the Native American Rights Fund, will serve as guest speaker for the Stephen F. Austin State University geography program’s 2016 Geography Awareness Week. He will present “Legal History of the Peyote Religion and Its Connections to Texas” at 6:30 p.m. Wednesday, Nov. 16, in Dugas Liberal Arts North, Room 142, on campus.


NACOGDOCHES, Texas — Organized by Stephen F. Austin State University’s geography program within the Department of Anthropology, Geography and Sociology, an attorney for the Native American Rights Fund will serve as guest speaker for the 2016 Geography Awareness Week taking place nationally Nov. 13 through 19.

Steven Moore’s presentation, titled “Legal History of the Peyote Religion and Its Connections to Texas,” will begin at 6:30 p.m. Wednesday, Nov. 16, in Dugas Liberal Arts North, Room 142, on campus. The event is free and open to the SFA and Nacogdoches communities.

“Mr. Moore is a senior lawyer affiliated with the Native American Rights Fund, which is an internationally recognized group supporting Native American rights,” said Dr. Darrel McDonald, SFA professor of geography. “His presence on campus provides SFA with access to an expert in the field of Native American law policy. The event also adds to the university’s mission to broaden student access to diversity issues as well as build relationships for the future.”

A 1979 graduate of the University of Colorado Law School, Moore joined NARF in 1983 as a staff attorney. This past May, he received an Honorary Order of the Coif award from his law alma mater for his service to Native Americans and the Indian Law Program at UC.

“I feel Mr. Moore’s presentation will provide folks in attendance a better understanding of the positive social value that the Native American Church has on tribal members,” McDonald said. “Also, I think the discussion will increase understanding of the struggles church members have had to endure to practice their religion during this past century.”

Begun by National Geographic, the theme for Geography Awareness Week is dedicated to national parks, which are celebrating their 100-year anniversary. In addition, the week and Moore’s presentation coincide with American Indian and Native Alaskan Heritage Month, which occur each November.

“The purpose of the event is to provide attendees an opportunity to become more aware of geography research and how it inherently becomes interdisciplinary in nature,” McDonald said. “In particular, the talk illustrates an example of how geography connects places and people as well as how social perspectives impact religious practices in the United States vis-a-vis the legal system.”

The geography program partnered with the SFA Pre-Law Club and Office of Multicultural Affairs to make Moore’s presentation possible.