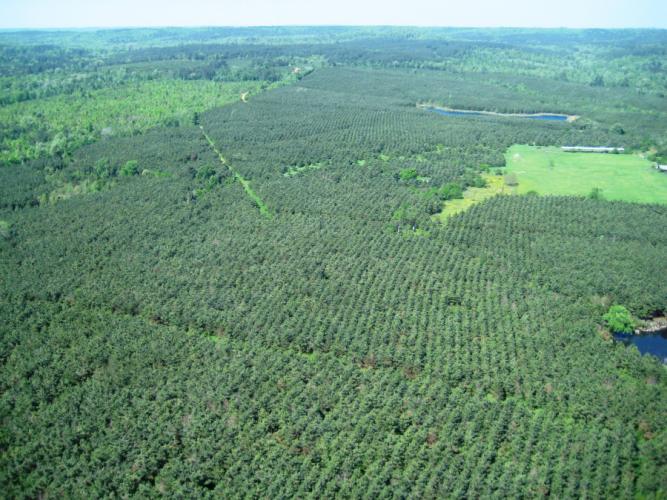 STMicroelectronics, a global electronics and semiconductor manufacturer, donated 3,449 acres of afforested land to the SFA Real Estate Foundation to be managed by the Arthur Temple College of Forestry and Agriculture.


NACOGDOCHES, Texas - Like much of East Texas, the air at the SFA Real Estate Foundation's forested land in Cherokee County harbors the rich scent of pine. Walking through the rows of trees, one might regard the tract as just another pine plantation dotting the region's landscape. But to do so would be missing the forest for the trees.

Since 2001, 3,449 acres of Arthur Temple College of Forestry and Agriculture-managed forestland in Cherokee, Houston and Shelby counties has sequestered 293,000 metric tons of atmospheric carbon dioxide.

In 2000, STMicroelectronics, a global electronics and semiconductor manufacturer focused on reducing its carbon footprint, purchased 1,425 acres of unforested land in East Texas. In 2005, the company donated this property to the SFA Real Estate Foundation. In 2010, STMicroelectronics donated an additional 2,024 acres. Grogan has served as the property manager for these now-forested tracts since 2005.

"STMicroelectronics is a very green company that has been at the forefront of environmental awareness for more than 20 years," said Dr. Kenneth Farrish, director of SFA's Division of Environmental Science. "Its annual corporate responsibility report shows its dedication to reducing solid waste, water usage, electricity usage and so on."

Farrish said the partnership with ST began after an SFA environmental science alumnus working for the company contacted him to discuss the manufacturer's desire to offset the company's carbon dioxide emissions by planting trees. To help ensure economic and environmental feasibility, Farrish recruited the expertise of Dr. Gary Kronrad, Bone Hill Foundation Distinguished Professor of forest resource economics for SFA's Arthur Temple College of Forestry and Agriculture. After meeting with company representatives, a blueprint emerged. ST purchased and afforested marginal East Texas pastureland with assistance from SFA's Arthur Temple College of Forestry and Agriculture. The company then donated this land to the SFA Real Estate Foundation to be managed in perpetuity by the college.

ST receives carbon credits, while SFA benefits through the living laboratories provided by the forests, offering opportunities for academic activities that are crucial to the research and teaching of natural resource management. SFA also receives revenue for environmental science and forestry scholarships through periodic timber and pine straw harvesting, as well as from leasing the properties for recreational activities.

Farrish laughed as he recalled conversations with befuddled real estate agents during the initial search for non-forested land.

"I told the Realtors I needed some really marginal farmland. They asked what I wanted to do with it, and I told them I wanted to plant trees. Their response was, 'Well, I can get you some forested land,'" Farrish said.

After he convinced Realtors that planting non-forested areas was a key aspect of the long-term strategy, the plan truly began to take shape.

"Theoretically, it (the forested land) will forever be sequestering carbon and providing scholarships," he said. "It's one of the biggest things I feel like I've done in my career."

Grogan explained that even after timber is harvested, the carbon continues to be sequestered. The amount sequestered depends on the fate of the wood.

"The wood is going to go into a product of some sort, and the Department of Energy estimates how much of that carbon it believes will still be sequestered in two forms after 100 years," Grogan said.

Grogan added that oriented strand board, a common product made from pulpwood in East Texas, has roughly the same sequestration rating as saw timber. It is estimated that approximately 60 percent of the carbon will still be sequestered or in use after 100 years.

"We've tried to put the bulk of what we've harvested into oriented strand board, and we've been successful with that, except last year we did have a tract where the material went for fuel wood," he said.

The timber from that particular harvest was pelletized and sent to Europe as biomass for use in its renewable energy sector. Grogan said although the carbon was not ultimately sequestered for an extended period of time, the use of a renewable resource for power generation still offsets fossil-fuel emissions.

To date, the revenue generated through the management of the forested tracts has provided scholarships for SFA students. In 2010, SFA renamed the endowed scholarship fund to honor retired ST executive Robert L. Banks, a native of Rusk, Texas, who advocated afforestation efforts within the company.

The forests support numerous research and academic efforts in the Arthur Temple College of Forestry and Agriculture. Graduate students engage in ongoing soil and above-ground carbon sequestration monitoring, researching the effects of varied thinning regimes on tree growth and development, and compare the growth and survival rates of Texas' four native pine species. The sites also are used for undergraduate coursework.

Both Grogan and Farrish express excitement when contemplating the future of the forested land.

"There are lots of opportunities on the properties as the trees grow," said Grogan. "There will be more ecological diversity and more opportunities for research and educational use."

To learn more about this and other research, contact the Arthur Temple College of Forestry and Agriculture at (936) 468-3301, or visit atcofa.sfasu.edu.