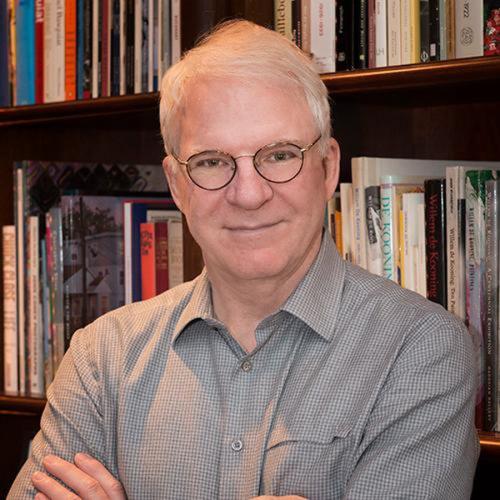 
NACOGDOCHES, Texas - Most fans of the hilariously funny Steve Martin are familiar with him as an actor, stand-up comedian and banjo player.

Images of "a wild and crazy guy" exclaiming "Excuse me!" and performing the song "King Tut" on "Saturday Night Live" are ingrained in a generation of Martin devotees. As a film star, his roles in "The Jerk," "The Pink Panther," "Parenthood," "Cheaper By the Dozen" and dozens more comedies are legendary. Musically, he's known for his skillful banjo performances of bluegrass music.

These credits and accolades in film and music span decades, but it is less widely known that he is also an acclaimed writer. He has published a memoir, "Born Standing Up," and the novel, "An Object of Beauty," and he has written numerous plays and screenplays. Martin and Edie Brickell collaborated on the musical "Bright Star," which just closed on Broadway after a successful three-month run.

Martin's first full-length play, "Picasso at the Lapin Agile," was initially presented as a reading in Martin's Beverly Hills, California, home, with Tom Hanks reading the role of Pablo Picasso and Chris Sarandon reading the role of Albert Einstein. Later, the play opened at the Steppenwolf Theatre Company in Chicago, Illinois, and played from October 1993 to May 1994, then went on to run successfully in Los Angeles, New York City and several other U.S. cities.

Reflective of Martin's humor, "Picasso" is a "must see" for his fans, according to Inga Meier, assistant professor of theatre and director of the production.

"I think I did pretty well, considering I started out with nothing but a bunch of blank paper." - Steve Martin

Martin has "a distinct brand of humor that is simultaneously irreverent and playful," Meier said in describing the playwright's writing style.

"Writer's block is a fancy term made up by whiners so they can have an excuse to drink alcohol." - Steve Martin

The play is about an imagined meeting in 1904 between a would-be scientist called "Einstein" and an irresistible-but-unknown painter named "Picasso" in a Paris café called the Lapin Agile. Wit and whimsy fuel their talk of creativity and inspiration with the bistro's unforgettable cast of regulars until a very different kind of genius mysteriously arrives from the future.

"Boy, those French! They have a different word for everything." - Steve Martin

"In 'Picasso,' Martin's humor is blended with profound questions regarding feminism, war, human relationships, the nature of creativity, the relationship between art and science, and how we define ourselves in relation to the past and future," Meier said. "These themes are as relevant now - more than 20 years after the play was written - as they were to the play's first audiences and as they were to the time in which the play is set.

"To loosely borrow from the character of Einstein, the play is about 'everything,'" she added. "In the play, Picasso states that his ideas touch the heart, whereas Einstein's touch the mind. This play speaks to both."

"Above all else, I want the audience to have fun," Meier said.

General admission tickets are $15 for adults, $10 for seniors and $7.50 for students/youth. A "pay-what-you-can" performance is July 6.