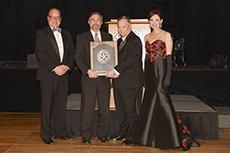 The Bone Hill Foundation was inducted into the Stephen F. Austin Society in recognition of contributions made to Stephen F. Austin State University during the 28th annual SFA Gala. Pictured are, from left, Jimmy Mize, chair of the SFASU Foundation Board of Trustees; Dr. Gary Kronrad, the Bone Hill Foundation Distinguished Professor within SFA’s Arthur Temple College of Forestry and Agriculture and foundation board member; Dr. Baker Pattillo, SFA president; and Jill Still, vice president for university advancement. 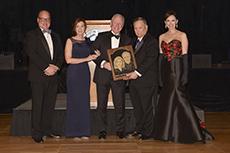 Kathy and Robert Lehmann were inducted into the Stephen F. Austin Society in recognition of contributions made to Stephen F. Austin State University during the 28th annual SFA Gala. Pictured are, from left, Jimmy Mize, chair of the SFASU Foundation Board of Trustees; Kathy Lehmann; Robert Lehmann; Dr. Baker Pattillo, SFA president; and Jill Still, vice president for university advancement. 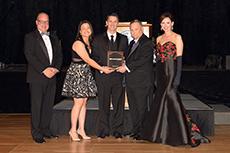 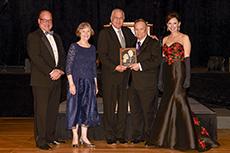 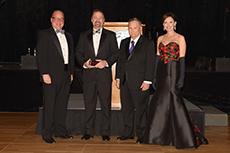 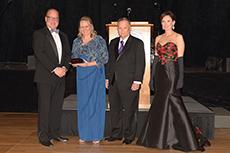 Dr. Emmerentie Oliphant, professor in SFA’s School of Social Work and director of the Master of Social Work program, was awarded the 2016 Faculty Achievement Award for Research during the 28th annual SFA Gala. Pictured are, from left, Jimmy Mize, chair of the SFASU Foundation Board of Trustees; Oliphant; Dr. Baker Pattillo, SFA president; and Jill Still, vice president for university advancement.

“We are so grateful to have this opportunity to recognize such giving individuals and organizations who help transform student experiences in higher education,” said Jill Still, SFA vice president for university advancement. “The university is very fortunate for their support.”

The annual event included a cocktail reception, a candlelight dinner and dancing with entertainment provided by Blind Date, a group of accomplished musicians from Austin who performed hits, including rock, jazz, country and hip-hop.

Bone Hill Foundation
The Bone Hill Foundation was established in 1967 with the goal of helping those in need by Will Bridges, owner of the Bone Hill Ranch in Shelby County. Since 1991, the foundation’s board has focused on providing scholarships for students pursuing higher education and actively encourages high school graduates to prepare for the future through college or vocational school training, according to Rick Campbell, Bone Hill Foundation chair.

Bone Hill has funded scholarships for hundreds of SFA students in the Arthur Temple College of Forestry and Agriculture, James I. Perkins College of Education, Rusche College of Business, College of Sciences and Mathematics, Richard and Lucille DeWitt School of Nursing, School of Art and engineering program.

The management and sale of timber from the ranch provides income to the foundation, job creation in the timber industry and, most importantly, scholarships for students from Shelby County and the surrounding areas. The Bone Hill Foundation has provided more than $2.8 million in scholarships for Shelby County students.

Kathy and Robert Lehmann
The Lehmanns are a gracious, well-known couple who have a distinct, long-standing relationship with the university, both personally and professionally.

Robert “Bob” Lehmann is recognized for his contributions in the advancement of the latest surgical techniques in the management of eye diseases and has been instrumental in bringing new technology to the field of ophthalmology. Kathy, his wife, is a nurse and the administrator of Lehmann Eye Center. She attended SFA from 1977-79, completing her prerequisites for a bachelor’s degree in nursing prior to the university establishing its nursing program.

Through the years, they have supported the College of Fine Arts, Richard and Lucille DeWitt School of Nursing, Department of Modern Languages, hospitality program, College of Sciences and Mathematics, Archie McDonald Speaker Series, student scholarships, athletics and Women in STEM. Kathy also serves as an SFASU Foundation trustee.

The couple’s passion for the sciences, along with their long-standing commitment to SFA, will help catapult SFA students to success.

The Lehmanns are a remarkable couple who complement each other through their community service and family business.

Mattress Firm
The name “Mattress Firm” has been well known on the SFA campus for years due to ties with Steve Stagner, an SFA alumnus now serving as executive chairman of the Mattress Firm Holding Corp. Most recently, Mattress Firm financed a renovation of a portion of the first floor of the Rusche College of Business to create the Mattress Firm Commons.

The Mattress Firm Commons creates an environment that fosters collaboration and teamwork, according to Amanda Robbins, vice president of talent acquisition and retention for the company. Robbins spoke at the January ribbon cutting on behalf of the company.

With more than 3,500 company-operated and franchised stores across 49 states, Mattress Firm has the largest geographic footprint in the United States among multi-brand mattress retailers. Founded in 1986, Houston-based Mattress Firm is the nation's leading specialty bedding retailer with more than $3.5 billion in pro forma sales in 2015.

Through its brands, including Mattress Firm, Sleepy's and Sleep Train, the company offers a broad selection of both traditional and specialty mattresses, bedding accessories and other related products from leading manufacturers, including Serta, Simmons, Tempur-Pedic, Sealy, Stearns & Foster, King Coil and Hampton & Rhodes.

Elvin “Buddy” and Tommie Jan Lowery
The Tommie Jan and Elvin Lowery Court in the William R. Johnson Coliseum on the SFA campus is named in honor of Elvin, the university’s first graduate to play in the NBA, and his wife, Tommie, a former SFA history professor. The couple donated funding to renovate the nearly 30-year-old court, officially unveiled in August 2015, and also have provided funding for student scholarships.

Elvin “Buddy” Lowery was born in Nacogdoches County and attended Huntington High School. He earned his bachelor’s degree from SFA in 1959. Elvin played for the Lumberjack basketball team under coach John O. Stephens from 1957-59. During that time, he led the Lumberjacks with 391 points, was named to the all-conference team in 1959 and received the Todd Memorial Award. Elvin later played in the Industrial Basketball League for the Technical Tapers in New York City and professionally for the Detroit Pistons in the National Basketball League.

Buddy serves as chairman of the board of Huntington State Bank. Civically, he has served as a Texas Parks and Wildlife Department deputy game warden in his free time. He became acquainted with the department through the exotic game ranch he owns.

Tommie Jan Lowery was born in Huntington and graduated as class valedictorian from Huntington High School. She received her bachelor’s and master’s degrees from SFA in 1957 and 1960, respectively, then went on to attend the University of Virginia. Tommie taught at Lufkin High School before joining the SFA Department of History where, after 37 years, she retired as an associate professor of history.

Tommie served as secretary for the East Texas Historical Association and in many other civic roles, including as president of the McMullen Memorial Library Board.