Recital to feature music composed in honor of national parks 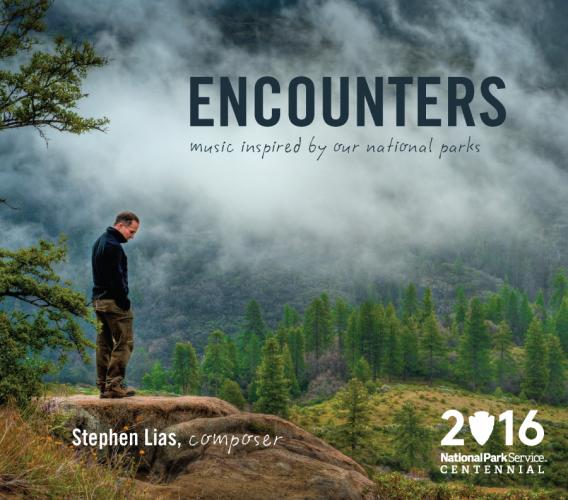 Cover image of the CD "Encounters: Music Inspired by Our National Parks," featuring the musical compositions of Stephen Lias.

The recital is presented as part of the centennial celebration in 2016 of the National Park Service.

"This year marks the 100th anniversary of the founding of the National Park Service," Lias said. "As part of our national celebration, I recently released a CD of park-inspired chamber works titled 'Encounters: Music Inspired by Our National Parks.' Three of the pieces from that CD are included on this recital."

"River Runner" was the first piece Lias composed about a national park. It recounts a paddle trip on the Rio Grande through Big Bend's Santa Elena Canyon.

"Starting with the frenzy and excitement of setting out, it moves through the somber landscape and then concludes with the terror of 'Rockslide Rapids,'" Lias said. "The audience can be assured that the performance is entirely authentic, since the trombonist was there for the adventure as well."

"Range of Light" is the most recent of the pieces on the program, and employs a different approach, the composer said. Rather than going into the park and writing about his experiences, Lias used four of Ansel Adams' iconic photos of Yosemite as his inspiration - composing one movement about each of them. Lias will display the images for the audience during the recital.

Lias' park-inspired pieces have been performed across the country, and upcoming performances are scheduled with the Shreveport, Anchorage, and Fairbanks symphonies, as well as an NEA-funded commission from the Boulder Philharmonic for a new orchestral work to be premiered in 2017 at the Kennedy Center for the Performing Arts in Washington, D.C.

There will be a reception in the lobby following the concert. Audience members are encouraged to stay and greet the composer and performers. CDs will also be available for sale. A portion of all CD sales will go to the National Park Foundation.

The concert is a joint presentation of the SFA College of Fine Arts and School of Music. Tickets are $8 for adults, $6 for seniors and $3 for students and youth. For tickets or more information, call the SFA Fine Arts Box Office at (936) 468-6407 or visit www.finearts.sfasu.edu.