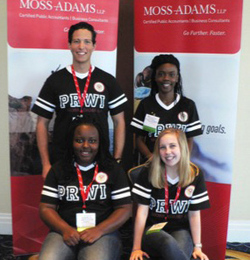 Bottom left: Jacquelyn King, a Stephen F. Austin State University accounting graduate student from Livingston, Texas, participated in the 2016 Project Run With It competition, where her team placed first for its work with Bike Maryland, a not-for-profit organization that promotes bicycling, increases safety, improves conditions and provides a voice for bicyclists in Maryland, according to bikemaryland.org.

NACOGDOCHES, Texas - With a deadline of 4:29 p.m., a team of university students began to generate ideas for the competition. The team was allowed only 30 hours to develop a plan to help Bike Maryland, a not-for-profit organization, rework its infrastructure.

Jacquelyn King, a Stephen F. Austin State University graduate student in the Schlief School of Accountancy from Livingston, Texas, was a participant in the 2016 Project Run With It competition. Her team, comprising four university students, placed first for its work with Bike Maryland, an organization that promotes bicycling, increases safety, improves conditions and provides a voice for bicyclists in Maryland, according to bikemaryland.org.

"We stayed up for like 20 hours straight, but it was worth it at the end of the day," King said.

The competition was part of the annual Beta Alpha Psi meeting, which took place in Baltimore, Maryland, this August. BAP is an international honor organization for financial information professionals, and King is a member of the SFA chapter, Epsilon Mu. Members must maintain a high GPA and commit to community service and professional hours.

This is the second consecutive year an SFA student in the Rusche College of Business has been part of a team that placed first at the competition. SFA Epsilon Mu co-faculty advisers Drs. Nikki Shoemaker and Kelly Noe attended the meeting with 11 students who attended professional workshops.

"We are thrilled our students have this opportunity and that two years in a row they have been rewarded for their hard work. The experience gets students out of their comfort zone, and it allows them to meet people from all walks of life and different schools," Shoemaker said. "It allows them to see that their education here at SFA is on par with other universities, and they are getting to share in the same types of experiences as larger schools."

King said her team first analyzed Bike Maryland's website and social media accounts to help them better understand the organization. Then, the team established a base for Bike Maryland's subscribers to increase revenue and created a social media campaign to help gain exposure. Team members produced a short presentation, which they delivered to Bike Maryland representatives who then selected the winning team.

"At the end of the day it is about your client, what they need and want. The competition taught me a lot of things, but mostly to get out of my comfort zone," King said. "It was a great experience to be able to talk to and work with people from different schools and learn about their experiences."

According to King, the competition also allowed her to tie everything she's learned at SFA in her accounting, finance, management and marketing classes together.